Mystery object - for the birds 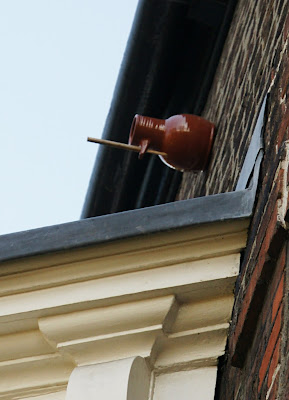 The mystery object on the front of Hogarth's House is a bird pot or 'sparrow pot'. These ceramic, bottle-shaped objects were designed for birds to nest in and seem to have been popular throughout London in the eighteenth century (and for several centuries before). However, their exact purpose is uncertain.
A similar pot has been found in Williamsburg, USA; you can buy a replica from the Colonial Williamsburg catalogue, which assumes that the birds were welcomed in order to control insects. However, that doesn't seem to be quite such a convincing explanation for urban London. Why, then, were city-dwellers eager to attract small birds to nest outside their windows?
The likeliest explanation seems to be that the eggs and baby birds were readily accessible (by reaching out of a window and unhooking the bottle) so that they could be taken and eaten. This rather grisly explanation does raise a question: were the tiny amounts of protein worth the effort? I also thought that birds would soon learn not to nest in these 'bottles' if they wanted their young to survive, but apparently they are more likely to respond by laying another clutch of eggs.
It will be interesting to find out how the bird pot on Hogarth's House fares. I should add that the staff have no plans to eat any birds nesting there!
- November 22, 2011

I seem to recall birds being considered to be a bit of a pest in pre-victorian times though.

They had a bad habit of eating the grain that was for the cart horses and cows.

Would be very surprised if people wanted to welcome them to their homes or encourage breeding.

It does seem odd: perhaps they lured them to these pots so that they could kill them more easily? Not terribly efficient, but they can't have been a very efficient source of food either.

According to this article about Turkish culture, bird houses were created for the pleasure of providing homes for birds, not for food - from the 15th century onwards! This is the link : http://www.turkishculture.org/architecture/bird-houses-104.htm