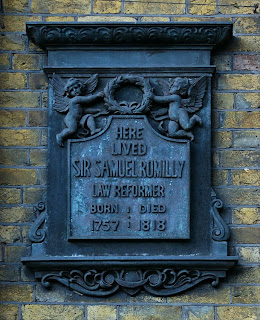 His first success was the abolition of the death penalty for theft from the person. Unfortunately, his subsequent attempts at similar reforms to other offences were unsuccessful. (The exceptions were repeal of the death penalty for theft from bleaching grounds, and for soldiers or sailors who begged without an official pass.) His work was not in vain, though: the political atmosphere began to change so that in 1823 the death penalty became discretionary rather than mandatory for many offences, and by 1861 only five capital offences remained.
Sadly, Romilly would not see these later successes. When his wife died suddenly in 1818, he was dreadfully distressed. At his home in Russell Square, now marked by a plaque, he cut his own throat just a few days later.
- December 14, 2011