St Katharine by the Tower 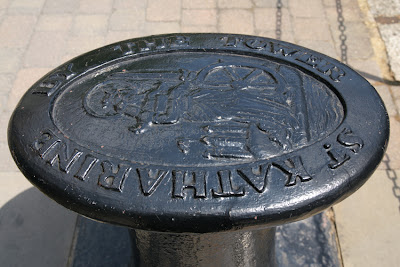 Around St Katharine's Docks are a number of mooring bollards, topped with this attractive design. It reads 'St Katharine by the Tower' and has an image of the saint in the centre. She is stood alongside a wheel: apparently innocuous, but actually a reminder of her martyrdom by being broken on the wheel.

The name is that of a hospital which formerly stood on the site. Established in the twelfth century, it was demolished in the 1820s - along with over a thousand houses, slum accommodation for 11,300 people - in order for the docks to be built. There is evidence of a smaller dock having been here throughout the site's history, but Thomas Telford's scheme gave two large, purpose-built commercial docks surrounded by secure warehouses for valuable cargo.

The docks could not take larger ships, and were already starting to decline before being bombed in the Second World War. They closed in 1968. Their prime location next to Tower Bridge, however, ensured that redevelopment has followed. The docks are now a marina with restaurants occupying the warehouses; the bollards are subtle reminders of a more industrial past.

You may also like to know that thousands of people were displaced without compensation, in order to build the dock, which did make profit, but didn't become a great commercial success, so the question remains whether the Church and Hospital should have been discarded,(many said vandalised at the time)? The last owners of the Docks made an abortive attempt to create new buildings in the Dock, but rightly failed. The new owners, led by Nick Leslau, seem to have a much deeper respect for appreciating and respecting the current beauty, and has planned an exciting programme for creative improvement, so avoiding damage for further generations to look back on.