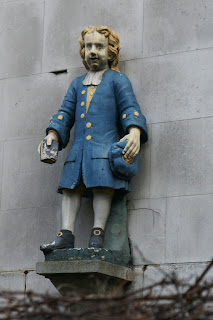 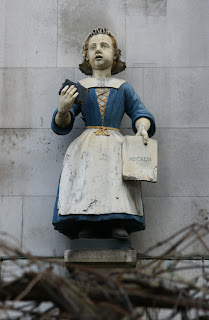 I've posted on several occasions about the figures of schoolgirls and boys placed above the school entrance. They served not only to advertise the educational premises but also to model the school uniform - a real attraction for poor families who could not usually afford such clothes for their children.

As saints had their attributes, so the schoolchildren carry their books. The girl also holds a book or parchment in her left hand with the date of the school's foundation, 1696. (The figures themselves are probably eighteenth-century.) It was St Andrew's Parochial School, originally located in Brook Market. After it moved to Hatton Garden, she and her friend took up their posts at the Cross Street entrance. Another pair still watch over the main entrance but these two were moved after the Second World War to the facade of St Andrew's Church.

Fascinating - thank you! I also like the Blewcoat School one, now the National Trust Gift Shop in Westminster http://www.nationaltrust.org.uk/blewcoat-school-shop/history/

Little children always scares me, but this ones are super cute. I've seen them around and is great to know that the reason to stand forever outside their schools is to show their uniforms. LOVELY!!

For one moment I thought these were the figures that I photographed in Hatton Garden (see A stroll around Hatton Garden and Farringdon) on what was once St Andrew's Parochial Schools. They are, however, a different set though the costumes and poses are almost identical, down to the cap and book held by the boy and the scroll held by the girl.

With the latter we find an intriguing difference: in your picture, the scroll holds the date of the school's foundation, whereas in mine it bears the dates of the most recent repaintings!

I assume the scroll of the St Andrew's girl also originally carried the foundation date. Rather a pity then, that it has been over-painted.