We may think of the Victorian age as a politer time, when greetings cards featured sweet children, cute kittens, lacy borders and the language of flowers. 'Vinegar valentines', with their crude caricatures and cruel 'humour', tell a different story. 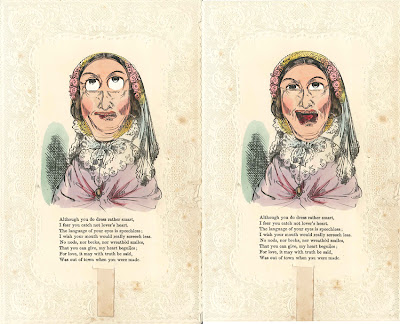 These cards appeared in the mid-nineteenth century and were generally cheap and poorly printed, although the mechanical example above, posted on Valentine's Day 1859, is a little more elaborate. Its verse is typical:


Although you do dress rather smart,
I fear you catch not lover's heart.
The language of your eyes is speechless;
I wish your mouth would really screech less.
No nods, nor becks, nor wreathed smiles,
That you can give, my heart beguiles;
For love, it may with truth be said,
Was out of town when you were made.

The cards might target particular occupations, or be directed at personal characteristics of the recipient. Add an inexpensive stamp and the anonymity central to the valentine's tradition, and a cruel insult could be sent with little effort or risk of detection.

Unsurprisingly, such cards were often not kept or recorded by their recipients. As a result, although it is known that about half of valentines' cards in the mid-century USA were 'vinegar', we don't know if the same proportions applied in Britain.

The cards were unpopular with many commentators, who found them vulgar, unpleasant and morally damaging. It would take a drastic decline in the popularity of all valentine's cards in the early twentieth century, though, for the genre to disappear. When the giving of love tokens revived in popularity, this unpleasant counterpart remained in thankful obscurity.

Interesting - I had not heard of these "vinegar" cards.

The malevolent impulse behind them is present in our own age (look at the dreadful "flaming" and bullying that goes on on the Web under the protection of anonymity) and in every other age. The only difference is the degree to which is it recorded for posterity.

The Victorian era may have had more formal manners but this is just the code adopted by a particular community to grease the wheels of communication. It is possible to maintain the formulae of politeness and still be bitingly rude. I am sure that that art was well practised in the Victorian era.

Moreover, the straiter-laced a society, the more outrageous its relaxations tend to be in order to release the pent-up energies of frustration. The free and easy discourtesy of today's manners probably makes "vinegar" cards unnecessary.

I enjoyed reading your post - I hadn't come accross a mechanical vinegar valentine before! I've been working at the Museum of London to put their valentine card collection online. The collection there was mostly made up by the a stationer, so he kept samples of the cards he sold. The collection contains a vast number of spiteful cards that might not otherwise have survived. I've blogged about them here and the whole collection can be accessed through Collections Online There are lots of examples of these cards - I hope you enjoy looking through them!

I tend to agree with you, SilverTiger - I think what was surprising about these cards, however, was the extent to which they were used. It's a sort of institutionalisation, or at least commercialisation, of bullying. Again, there are parallels today...

Thank you for the links, Ellie: what a great project. I'll add a link in the main post.

I found this very interesting. A few years ago a bought an anti-valentine which dated from around 1900 - 1910 and was cheaply printed inred and black. It took the form of a long strip of paper on which was printed an image of a shop girl dressed to the nines and a short verse making fun of her, calling her a swell. The same dealer had similer anti-valentines mocking men.
In either case not something you would want to receive but not as cruel as your victorian example. Unfortunately along with most of my possessions it is in store so I cannot scan it for you to see.