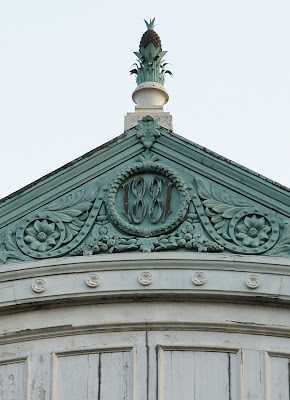 Above the date '1881', this fine pineapple looks good enough to eat - but where is it? 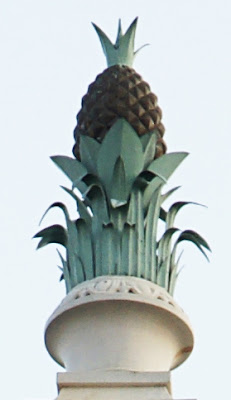 I am always impressed when patrons ask artists to represent an exotic symbol, one that could not have been locally grown. Fortunately a pineapple would be instantly recognised, unlike a mango or paw paw for example.

near London bridge/borough market. I always enjoy seeing them on my commute into work.

"In the Caribbean, Europe and North America, the pineapple became associated with the return of ships from extended voyages, and an emblem of welcome and hospitality that made its way into contemporary art." (wikipedia)

I don't know what building this is on...but I wonder if it has something to do with trade, or travel? I can't wait to find out!

Some Londonist Facebook friends have had a stab at guessing.

They got it right - a market, but this particular pineapple isn't at Borough. Rather oddly, it's Smithfield, the meat and livestock market. Not an obviously welcoming place!

I suspect that the architect or builders just thought a pineapple would look pretty. The presence of similar ones at Borough suggests they may have been ordered from a catalogue (which was common Victorian practice for ironwork).