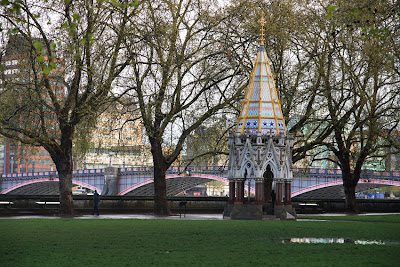 Victoria Tower Gardens are beautifully located, alongside the river Thames and right next to the Houses of Parliament. There could hardly be a better site, then, for this fountain which commemorates Sir Thomas Fowell Buxton, his fellow anti-slavery campaigners, and the emancipation of slaves in the British Empire in 1834. 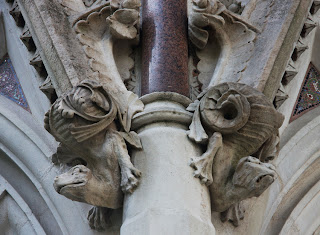 In fact it didn't move here until 1954, having stood until then in Parliament Square itself. The fountain was erected in 1865, the work of architect S S Teulon. (Buxton's son, a self-taught architect who commissioned the fountain, probably collaborated with him on the design.) It certainly has all the hallmarks of a fine piece of Victoriana. As well as the brightly-coloured enamelled steel roof, there is carving, mosaic, coloured granite, and barely a square inch without fancy flourishes of some kind.


When the square was redesigned in 1949,  Victorian gothic was deeply unfashionable. The fountain was removed and the original plan was probably to quietly get rid of it. However, there were strong objections - particularly from the Anti-Slavery Society - and instead the Parliament Square Act 1949 was amended to require re-erection in a new site approved by both Houses of Parliament. (That displeased some parliamentarians: Sir Edward Keeling 'observed that the memorial had no artistic merit whatsoever, and he said that he hoped that it would be destroyed by the Ministry of Works.')

Despite its eye-catching appearance, the fountain has one major shortcoming: it no longer works. 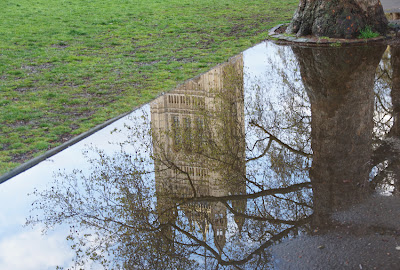 I can see why Victorian gothic was (and probably still is) deeply unfashionable, but it WAS of its era! If we destroyed art or architectural objects not of contemporary taste, there would be nothing left on earth.

And the current location is great.

Great article and terrific photos - very atmospheric. We haven't yet managed to publish this memorial but we do have the memorial to the fountain in its original location, the north side of Parliament Sq.

A memorial to a memorial - perhaps we are too completist?

You must have been the lady I saw taking photos in the puddles Tuesday lunchtime and of the Burghers of Calais- so inventive and a great pic!

London Remembers, there's no such thing as too completist! Thank you for that link, I'll have to search out the plaque next time I'm nearby.

Thank you, Ouvrier - but I actually took these photos a few days earlier so it wasn't me!

Hels, I should have added that the great irony of it is that the Houses of Parliament are themselves fine Victorian gothic!