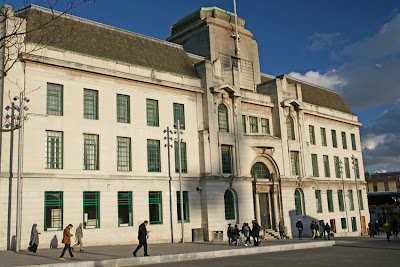 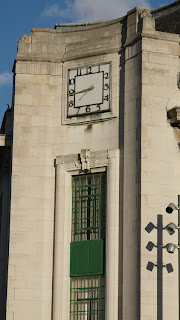 General Gordon Square in the centre of Woolwich is dominated by this building of 1935. It was the headquarters of the Woolwich Equitable Building Society (remember 'I'm with the Woolwich'?). Founded in 1847, they had become the third largest society in the country by the early 1930s. These grand new offices reflected that status.

The large stone building may have some typically 1930s detailing, but overall it speaks of the neo-Classical gravitas and permanence which financial institutions prefer to project. However, the air of permanence at least is misleading: the head office moved to Bexleyheath, demoting this Grade-II listed building to a mere branch, before a merger with Barclays saw it close altogether.

Victorian financial institutions could not have imagined that their world would one day change .. that the Empire would change ..that world recessions would make European economies collapse. No wonder their architecture reflected monumental and permanent security.

What is the building used for now?