My recent holiday began in Middlesbrough, North Yorkshire, and how better to get in the holiday mood than with an assortment of ghost signs? Perhaps the finest was this Esso example, which has traces of logos as well as the brand names Esso and Essolube. Above the former is 'Pratts', perhaps the name of a local garage or - judging by this link - possibly an earlier sign showing through. There is further writing at the bottom, now more or less indecipherable. It appears to say something along the lines of 'When you buy ...' 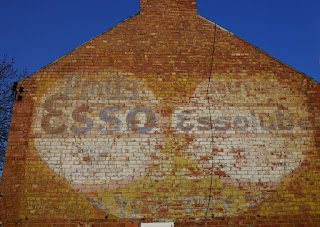 Arthur Thompson, auctioneer, valuer and estate agent, was established in 1866. The green of his sign still contrasts pleasingly with the red brick. Since the firm became Arthur Thompson and March in 1949, this sign may well be pre-war. 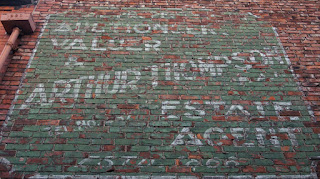 Near MacDonald's, Watson and Son Ltd advertise as 'plumbers, glaziers, glass' although the words are now faint and flaking. The business, according to online directories, continues to trade - but has presumably switched to other forms of advertising. 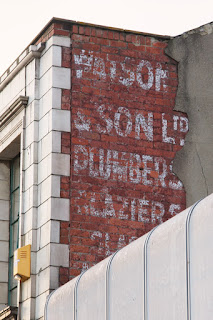 In an alley just off the main shopping centre is a reminder of the Second World War. As in London, painted directions guided people to public air raid shelters. Here, the 'ARP shelter for 367 persons' was in cellars under several local shops. Today the sign is unnoticed - I wouldn't have found it had I not happened across it on Hidden Teesside. 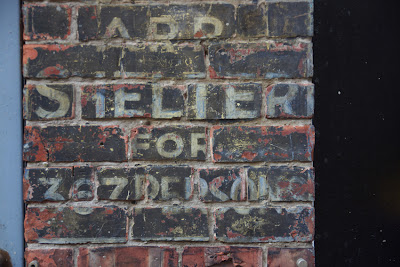 Have you entered my competition to win a copy of Titanic Remembered 1912-2012? Click here for details!

Hey Caroline
I live in Middlesbrough and I am glad someone took the time to get them pictures. I pass these signs daily and often wonder just how long they have been there. It reminds me of war time Britain, a little look into the past. Many thanks

Thank you, Daniel. I really enjoyed visiting Middlesbrough, and may do another post on Albert Park.

Will look forward to that Caroline, I have a good knowledge of the area so if you need any info drop me an email.

Lovely discoveries, I especially like the Esso one. I'm not sure if these are in the HAT archive yet but if not then they would be excellent additions.

These are wonderful finds - thanks for sharing.

Have u seen the one at redcar bus station

No - in fact, I've never been to Redcar. If I get the chance, though, I'll look out for it.