It's near-impossible to avoid the fact that this year is the Titanic's centenary. The number of events and publications marking the anniversary are evidence of an enduring fascination with the 'unsinkable' ship wrecked on its maiden voyage. As someone with only a basic knowledge of the doomed ship, I was pleased to receive a copy of Beau Riffenburgh's Titanic Remembered 1912-2012 from Carlton Books. It offers a good introduction to the ship, the disaster and the aftermath; the book, boxed, includes a DVD and facsimile documents. 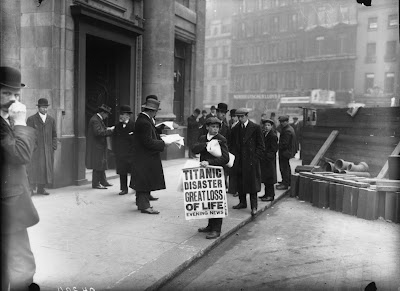 Sometimes, it seems that interest in the Titanic focuses so much upon icebergs and Edwardian luxury that the deaths of over 1,500 people are almost forgotten. (Titanic ice cube tray and anniversary doll, I'm looking at you.) By contrast, remembrance is the starting point here: the box is lined with the names of those who died.

The book itself offers a broad, contextualised account of the Titanic's short career. Introductory chapters look at 'the age of the liner' before we progress through the building, voyage and sinking of the ship. Finally, consideration of the aftermath and the disaster's legacy includes not only the extensive literature and memorabilia, but also memorials and improvements to maritime safety. All the pages are rich in illustration, and there are a number of fold-out blueprints and plans, along with envelopes of facsimile documents.

This is an engaging book, full of well-presented information including plenty of human interest. It probably won't add much for the serious Titanic enthusiast (Titanorak), as it aims for breadth rather than depth. However, it is fascinating for the general reader to browse through, with the facsimile items adding to the experience. 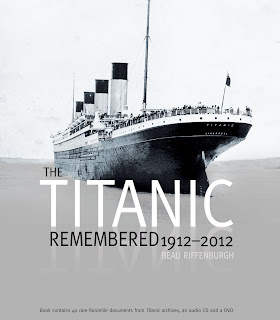 Win a copy of Titanic Remembered. Just email MiscComp@aol.com with your answer to the following questions:

1. How many scullions were on the Titanic's victualling crew?
2. Which famous British campaigning journalist lost his life when the Titanic sank?

The competition closes on 17 April 2012 at midnight British Summer Time.

Correct answers are those which agree with the information in Titanic Remembered. My decision is final!

The winner will be announced on the blog on 18 April. Good luck!

Images from Titanic Remembered 1912-2012 by Beau Riffenburgh, published by Andre Deutsch, £50, available from all good book shops and online.

I saw a week-long Titanic programme (April 9th-16th) advertised on tv at the VERY moment I opened your post. You are right... it is everywhere.

My only criticism of most histories is the focus on first class. Certainly people in that class were rich and famous before the catastrophe, but they became even more famous after it. Somehow their tragic loss has been well memorialised, perhaps at the expense of all the other tragic losses.

Indeed; I suspect it partly reflects whether sources are readilyavailable. Finding out about the life of a third-class passenger would require archival research, while a few minutes with Google is enough for some of the better-known casualties. It does then, of course, become a vicious circle.

By the way, Hels, have you entered the competition? The prize can be posted to Australia!

I'm sorry to say I would love one of the ice-cube trays ...

I'm not so sure about the ships, but love the icebergs!