In the mid-twentieth century, a seaside holiday right in central London was a popular choice. The Thames foreshore had long been a popular place for children to play, but it lacked the amenities of the seaside and was not particularly safe. The vicar of All Hallows by the Tower, Rev Clayton, was particularly concerned to see children playing on the pebbles by Tower Pier where the tide rose very quickly.

He inspired a project to change that, opening the safer section of foreshore which became known as Tower Beach. The Tower Hill Improvement Trust brought 1,500 bargeloads of sand to the foreshore in front of Tower Bridge. A genuine sandy beach was now in place, and Lord Wakefield of Hythe paid for a patrol boat and watchman to ensure safety. On 23 July 1934, Tower Beach opened. It was quite an occasion, as this British Pathe news film shows:

The beach, accessed by ships' ladders, was a huge success. As well as the joy of the sandy expanse itself, there were entertainments and deckchairs. Many thousands of people used it, right up until 1971 when it was closed because the then-polluted Thames was considered unsafe to bathe in. Much of the sand has now washed away, and the beach is no longer open for public entertainment except during National Archaeology Weekend.

There were disadvantages to the beach. The river isn't ideal for swimming in, so most visitors paddled in the edge of the river. More seriously, the beach was only accessible at low tide so visitors had just four or five hours a day to enjoy it. There was a rush for the steps when the tide came in! Nonetheless, the pleasure of making sandcastles in the heart of London was enormous and there are plenty of fond recollections recounted on the Memories of Tower Beach archive.

The foreshore at Greenwich is still readily accessible, and although it has pebbles rather than sand, was also popular for days out. Today, most of the (relatively few) users are walking rather than sunbathing. However, the idea of city beaches has not been forgotten: the success of Paris Plage suggests that they could still work in London, too. There were suggestions of a beach near the O2 this summer, although it doesn't seem to have happened yet. Meanwhile, there is some sand on the foreshore below the South Bank Centre, where you may see some elaborate creations: 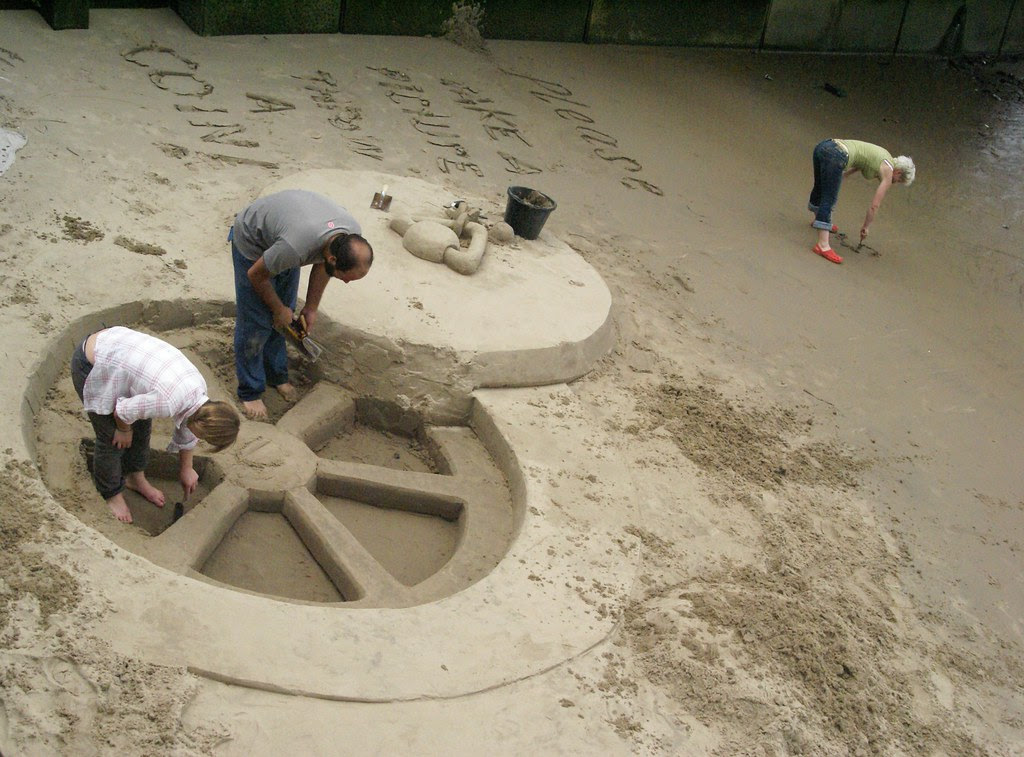 I agree with both your conclusions:

a] the idea of city beaches has not been forgotten and

b] the success of Paris Plage suggests that they could still work in London.

I could not imagine living on an ocean or river and not having access to sand, deck chairs, umbrellas, coffee outlets etc.

There are rivers and there are rivers and the Thames itself is several different rivers, the upper reaches having grassy banks and amenities such as boating while the lower reaches, in London at least, are hemmed in by the city. Building has unfortunately been allowed to go right down to the water in many places, leaving nothing that could serve as a beach or even space to insert a riverside walk.

Yet the Thames is fascinating in its own right and it is possible to enjoy it in so many ways - as the presence of weekend crowds clearly shows. I am not sure that creating a sandy beach and treating this as an ersatz Southend or Margate is the best way to use this remarkable facility. Then there is the problem of money: I doubt whether you could create a Tower Beach today without charging an entrance fee to fund its maintenance.

But the question remains: why do we need to make the Thames like somewhere else? It is unique and best left doing what it does best: being itself.