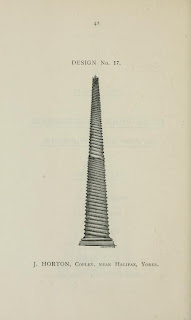 Paris got the Eiffel Tower in 1889. Within months, a competitor in London was being planned. It didn't quite happen - but came very close indeed.

Sir Edward Watkin, managing director of the Metropolitan Railway, bought Wembley Park in 1889. His idea was to establish a funfair, with a tower to rival Paris' as the centrepiece. The Tower Company Ltd held an open competition, and the designs would be published in a Descriptive Illustrated Catalogue of the Sixty-Eight Competitive Designs for the Great Tower of London. (Browse them for yourself here.)

The impact of the Eiffel Tower was everywhere in this scheme. Indeed, the preface to the book of designs began One of the objects of greatest interest in Paris is The Eiffel Tower, which is situated in the Champ de Mars. Only two and a half pages later is the prospect of a tower in London mentioned. 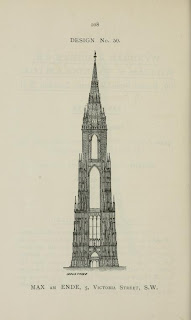 Many of the ideas are somewhere between bizarre and insane (a tower of vegetarians feeding themselves from hanging gardens - which didn't make it into the published collection; a non-leaning Tower of Pisa). Perhaps more intriguing are those which are peculiar but just within the bounds of insanity, such as J Horton of Yorkshire's giant screw. Pedestrians could walk all the way up the corrugated-steel spiral, which would have soared 1,200 feet into the air, or take a tram halfway. A 1,550-foot steel gothic design -with spiral steam railway - might seem equally unlikely, but it earned Max am Ende an honourable mention (though no prize money).

The winning design, by Stewart, Maclaren and Dunn, didn't actually inspire much enthusiasm in the judges. (Perhaps its most significant features were the height - 215 feet taller than the Eiffel Tower - and octagonal shape, giving more sides than the Eiffel Tower.) Nonetheless, building got underway for the ambitious structure which would house exhibition halls, dance halls, theatres, restaurants, and even turkish baths. To give  a sense of its scale, the Great Tower was to have been 180 feet taller than the Shard. 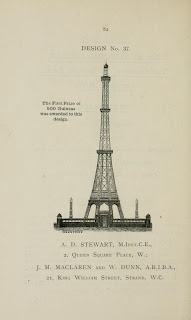 There was only one problem: money. The French government had subsidised Eiffel's tower, but there would be no such help for Watkin. Funding by public subscription didn't work, so Watkin's company was bearing the full cost. The design was modified to be shorter and four-sided, and by 1896 its  first floor was not only built but open to the public.

Then disaster struck: the weight of the iron structure was already so great that the foundations shifted. There was no more money, so construction would go no further.

The truncated structure remained open until 1902, but was unloved and neglected. It attracted the nickname 'Watkin's Folly' long before it was finally closed for reasons of safety. In 1907, the ill-fated structure was demolished (its concrete foundation would later be covered by the more-famous football pitch). The pre-eminence of the Eiffel Tower had not been seriously challenged after all.

I think the screw design is splendid, but what's insane is that the thread is designed to run ANTI-CLOCKWISE! No wonder it didn't win.