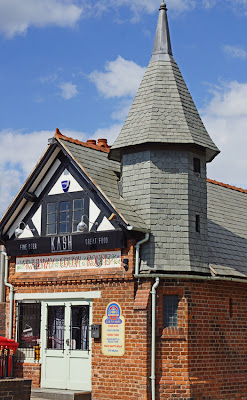 As I waited for my train at Chester, I passed the time with a cup of coffee. A century or so ago, I might have chosen hot chocolate instead - just along Brook Street at the charming Railway Cocoa Rooms. Today they have been transformed into a bar, which we will see to be somewhat ironic; however, their appealing signs remain.

The building dates from 1880. An advertisement from the late nineteenth century shows that it was one of four establishments owned by the Chester Cocoa House Company (Limited). Not only that, but they opened from 5am until 11pm. The latter feature is a clue to the purpose behind the business: cocoa rooms were intended as temperance alternatives to the pub for working people. Sensibly perhaps, the Chester company did not rely solely upon thirsty working men for custom but also emphasised its availability for 'picnic and school parties ... with or without notice'.

It's easy to laugh at the temperance movement, with its earnestness and its sometimes improbable alternatives to the pub. We should remember though that many of those active in the cause were motivated by a genuine concern for the effect of excess alcohol upon people's lives. It was not pleasure they objected to, but violence and the impoverishment of families. They also did more than condemn: endeavours such as cocoa houses and billiard halls aimed to offer real options to the public house and the gin palace.

The Chester premises have all suffered the fate of most temperance endeavours, closing down in the first half of the twentieth century. One suspects that the business loss would have upset their founders less than the fact that many, such as this one, are now drinking establishments.

We missed this place when we were in Chester, so I must remember to look out for it next time.

As you may have noticed, I like to "collect" drinking fountains from the Victorian and Edwardian eras and many of these were also donated by the local temperance society, providing an alternative to alcohol, yes, but also providing a source of clean drinking water, when so many pumps and fountains had been closed because they had become a source of diseases such as typhoid.

It is easy to poke fun at the temperance movement and to call its members kill-joys but when you look around and see the problems still being caused in our own day by over-indulgence in alcohol, they seem a lot more sensible.

Thank you for another great post. I live in the US--Great grandparents emigrating about 1880s. One of the prised possessions brought with them was a chocolate set. There were many hard feelings over who was to inherit it upon their passing. The cups went different ways with my mother keeping the large carafe. I used to wonder "what's the big deal"? Evidently, it was a big deal. I gather that for Mormon English converts, the Chocolate sets replaced the prised tea sets as one addiction replaced the other.

Great story. I am semi sympathetic to the women in the temperance movement who tried to save families from poverty and disgrace (when the breadwinner drank). And Melbourne had plenty of late 19th century examples of stunning coffee palaces to offer families as an alternative to the demon booze.

But I have never heard of cocoa rooms as an alternative to pubs. What a clever, family-friendly option that must have been.

The Temperance Billiard Hall in Kingston was still active in the late 60s, but was demolished to make a service road around the Bentalls Centre.

Silver Tiger, thank you for pointing out the drinking fountain connection - another nice example of the movement taking positive action. It's a shame that, although there's some attempt to put more working fountains in parks, these Victorian ones are not being put back in working order. (Admittedly, their communal cup is unlikely to make a comeback!)

Mark and Marianne, how interesting to hear about the chocolate set. Chester's chocolate rooms seem to have been associated with the Quakers; perhaps their involvement in the chocolate industry explains why cocoa rather than coffee, Hels!

HughB, did the billiard hall remain alcohol-free throughout its life?