The Secret History of our Streets: Deptford High Street, shown on Wednesday, has attracted a lot of local attention. It told a compelling story, and an important one both for reminding us of the human cost of such development schemes and for understanding how today's Deptford was shaped.

There has been a range of responses expressed on Twitter, on the BBC's website, and in local blogs. Generally, the reaction to the key part of the story - the often-unnecessary demolition of terraced housing and the effect on those whose community was broken up - has been positive. However, various reservations have been expressed by local viewers, particularly about whether ex-councillor Nicholas Taylor was portrayed fairly, and about the way the modern High Street is depicted. 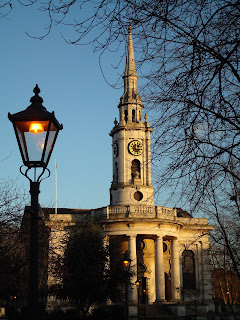 For a thoughtful analysis of the first issue, see this Crosswhatfields? post. The second issue is addressed by The view from Nunhead Station and Brockley Central. (Updated: and by Deptford Dame.) Many of these points resonate with me: some time was given to depicting the area's present in a way which doesn't reflect reality. As well as the pound shops and betting shops (and goodness knows there are too many of the latter), Deptford has thriving grocers' and butchers' shops, Caribbean bakeries, Asian supermarkets, an independent hardware store, restaurants, cafes and pie-and-mash shops, theatre, library, art galleries, the beautiful St Paul's Church, and much more. In painting a simplified picture of an area which went into sudden and irreversible decline, the programme did us all a disservice. In particular, its association of that decline with the arrival of immigrants made me uneasy.

It's ironic that having established how town planners falsely painted a negative picture of the area, the programme-makers went on to do the same. As Deptford continues to face challenges from developers and others, we need to counter that by showing there is something worthwhile here which shouldn't be damaged. Viewers of the programme might struggle to believe it.

i thought the councillor was stitched up a bit. not sure of the order it was filmed in but them having him on the high street at the end when there was this 'ah-HA!' reveal from the programme maker seemed like a low-rent attempt at being paxman (who i loathe anyway).
while watching it i was thinking the same thing about the stuff that is on the high street - it's not bad at all.

It's a while since I lived in SE London, but I must say the same thoughts occurred to me. The story of unnecessary demolition and disruption was well told, but the picture of the High Street today seemed skewed. AS if the programme makers had seen only what they wanted to see...

Yes, walking around the market and high street yesterday, I wondered again how they could justify that. It's livelier, with more variety and fewer empty shops, than most town centres. However, the programme makers didn't seem to want any hint of a happy ending.