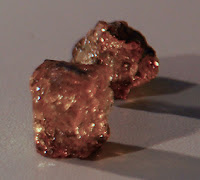 If you have an hour free tomorrow, and are in central London, it's worth going along to the Music Room at Gray's Antiques for Crossrail's exhibition on London archaeology. As the rail scheme digs into London's soil, it is providing an opportunity for archaeologists to find out more about our city's history. They are halfway through their excavations, and are displaying some of the discoveries made to date.

The objects on view are certainly some compensation for the disruption happening above ground. The oldest is a piece of amber, age about 55 million years. The other objects are much newer, but still range across the whole of London's history - from prehistoric bison bones to all sorts of Victoriana. 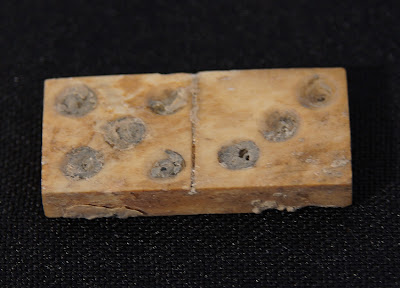 Some objects speak of everyday life - the domino discarded at an eighteenth-century tavern, the railway crockery found at Paddington. 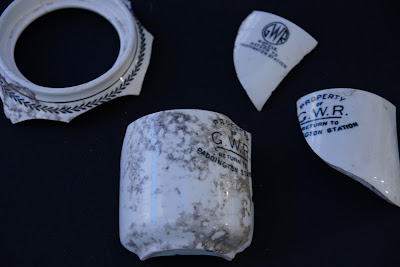 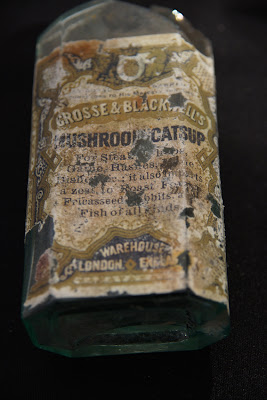 An empty bottle of Mushroom Catsup, its label still largely intact, reminds us that Crosse & Blackwell were once based in Soho. Nearby, a chunk of mediaeval clinker-built boat is being sprinkled with water to keep it in good condition. 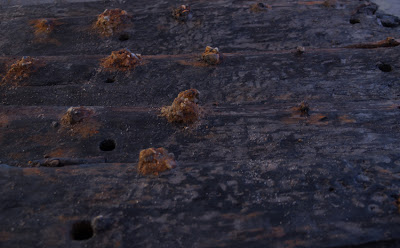 The star of the show is the skeleton, unearthed near Liverpool Street. However, while he may catch visitors' eyes as they enter the exhibition,the smaller objects exert their own fascination as we learn which parts of London's story they are telling. There's so much here already that the prospect of another two years' worth of finds still to come is very exciting. 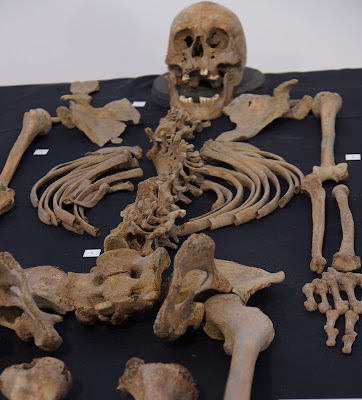 The exhibition is fascinating, and information boards provide context and images to accompany the objects on display. Unfortunately it's open to the public for one day only, but there are hopes of finding other venues. Let's keep our fingers crossed that a longer opening is possible in the near future as this deserves to be enjoyed by many more people than can visit in a day. In the meantime, if  you can - go!

I particularly like the Victorian grocery products because they tell us about domestic consumption and advertising back in the 19th century eg Dundee marmalade.

But the mushroom catsup has thrown me. I thought "catsup" was a made-up American word from the late 20th century, used to differentiate the product from real tomato sauce. Clearly that was not true.

The word has been around since the eighteenth century - I was fascinated on this too, and there will be a post on it next week!