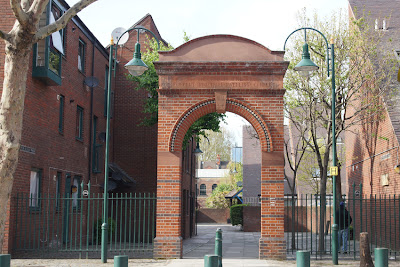 A very Victorian archway stands in Wentworth Street, E1. If you didn't know its age from the date, 1886, helpfully embossed in the keystone, then its inscription should summon up an atmosphere of nineteenth-century philanthropy. 'Erected by the Four Per Cent Industrial Dwellings Company Limited', its language and approach are typical of the era.

The company was established two years earlier by leading Jewish philanthropists including Nathan Rothschild and Frederick Mocatta. Its aim was to provide housing for the industrial poor, which would not only be more sanitary and commodious than their current homes but would also bring in a return of four per cent for investors despite modest rents. Octavia Hill employed a similar approach, promising investors a five-per-cent return on money invested in her social housing.

While all around them were overcrowded slums, the company's flats had toilets, sculleries and balconies - the kitchen and toilet shared with a neighbour - so it's no surprise that they were over-subscribed. More developments were built in other areas, from Camberwell in the south to Hackney in the north.
The first dwellings were in Flower & Dean Street, Spitalfields - the housing now gone, except for this archway. The company, however, lives on although its name was changed first to the Industrial Dwellings Society and then to IDS. 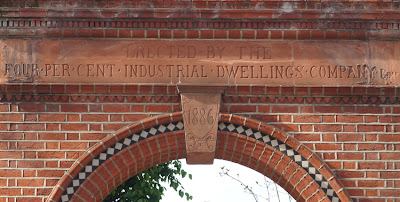 I have been interested in industrial estates in the second half of the 19th century for ages - not Utopias, but certainly decent living facilities for ordinary working families. I didn't know about your project in E1, but when I get back to Australia from my European sojourn, I will have a second think about city-based estates.