Among the exhibits at Crossrail's Bison to Bedlam was a bottle of Crosse & Blackwell's mushroom catsup. It raised two issues: the origins of the company in Soho, and the nature of the condiment itself. 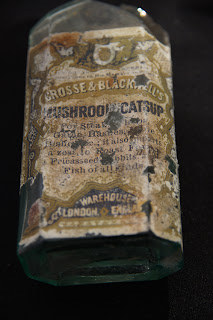 To begin with the sauce, catsup is an alternative spelling of ketchup (a word whose origins are Chinese and owe nothing to tomatoes!). Mushroom ketchup was a popular Georgian and Victorian condiment, made by salting field mushrooms before boiling them with water. The juice was strained, spiced and reduced, giving a thin, tasty sauce closer to worcestershire sauce than tomato ketchup.

Our bottle refers to 'His Majesty' so is probably Edwardian or a little later. Among the suggestions for use still legible on the label are game hashes, fricasseed rabbits and - more surprisingly - fish of all kinds. For Mrs Beeton, 'This flavouring ingredient, if genuine and well-prepared, is one of the most useful store sauces to the experienced cook, and no trouble should be spared in its preparation.' Since her recipe took five days to make, it is unsurprising that the less-dedicated cook was happy to buy the condiment ready-made.

Fortunately, Crosse & Blackwell had long been prepared to supply the need (as was George Watkins, whose mushroom ketchup is still on sale today). They were originally based in King Street, Soho but in 1838 acquired premises at 21 Soho Square. The building would remain their headquarters until 1925 although they had expanded through the area; their main warehouse later became the Astoria Cinema and Dance Hall. Crossrail, in turn, compulsorily purchased and demolished the Astoria; during the excavation of its site, the Crosse & Blackwell warehouse basement was rediscovered and our catsup bottle found. 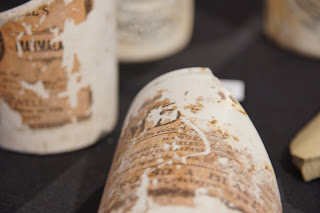 There is little sign of Crosse & Blackwell at Soho Square now. However, the statue of Charles II in the middle of the square does have a connection: when the gardens were redesigned in 1875, the statue was no longer wanted. Thomas Blackwell bought it and gave it as a gift to artist Frederick Goodall, who put it in his garden in Grim's Dyke, Harrow Weald. He in turn sold his house and garden to WS Gilbert (of Gilbert & Sullivan fame), and when his widow died it was returned by her bequest to Soho Square.

It always amuses me that something we today regard as rubbish and don't give a second thought to, becomes, give or take 100 years, a social document.

Perhaps instead of throwing away our "rubbish" we should be storing it carefully as an archive for the historians of the future!

silvertiger There already is a museum for all this sort of thing: the Museum of Brands, Advertising and Packaging in Notting Hill, a fascinating place to visit.

Thanks for that... I had no idea. If Mrs Beeton's recipe took five days to make, it also explains why we moderns are also happy to buy the condiment ready-made. I am prepared to _one hour_ preparing each dinner, including chopping, cooking, setting the table and dishing up.