Here are the answers to the mystery object quiz (if you haven't tried it yet, click straight over and no peeking!). 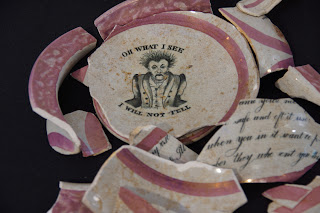 This was a novelty chamberpot - a survivor from the days when indoor toilets were a rarity. Variations on the 'what I see I will not tell' motto seem to have been popular. However, the alarming face staring from the bottom of the pot must have been disconcerting for the user!

A fragment from the side has parts of a verse visible. The whole verse was probably a standard one: 'This pot it is a present sent/Some mirth to make is only meant/We hope the same you'll not refuse/But keep it safe and oft it use/When in it you want to piss/Remember them who sent you this'. The occasions on which such chamberpots were given? Weddings.

Perfect for days when the Thames froze over, these ice skates were made from cow bones. They were used between the eighth and sixteenth centuries, and these examples were found in Broadgate, Liverpool Street.


In 1173, William FitzStephen described such skaters:

When the great marsh which washes the northern walls of the city freezes, crowds of young men go out to play on the ice. Some of them fit shinbones of cattle on their feet, tying them round their ankles. They take a stick with an iron spike in their hands and strike it regularly on the ice, and are carried along as fast as a flying bird or a bolt from a catapult. 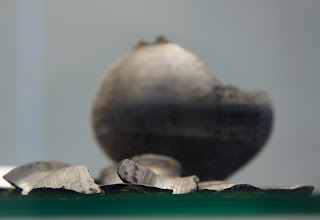 This is not any old pot, but a Roman poppy head beaker. Usually black or grey, as here, they were shaped like the seedheads of poppies - originally there would have been a flared rim around the top of the beaker, increasing its resemblance - and the dot decoration is typical.

Most are associated with burials, as this one was. Uncovered at Liverpool Street, it would have been just outside the city wall near the main road to York. It dates from the second century. 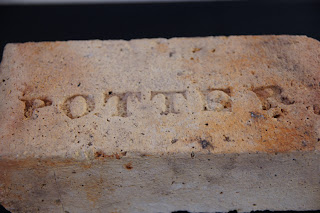 It was probably James Potter of Scotland whose surname was stamped on this Victorian firebrick. He owned brick and fireclay works around Falkirk, although this item ended up in the Limmo Peninsula.

Firebricks were designed to withstand high temperatures. They were used in various settings, from furnaces to fireplaces.


Do the crooked letters suggest that the impression was made letter-by-letter rather than with a single stamp? It seems a laborious approach (and examples of brick stamps on this site suggest a single stamp was typical), but using a wonky stamp was surely rather careless. Or perhaps the firing process was responsible? If anyone knows the answer, I'd be fascinated to hear. 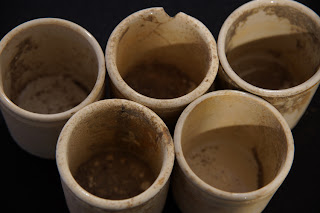 These jars were used for meat paste or, here, for beef extract. Fragments of labels show that they contained Extractum Carnis  - Latin for 'extract of meat'. It was developed by Liebig's - later Oxo - and although originally intended as a cheap meat substitute, was marketed instead as a dietary supplement.

I love the ice skates - there is something particularly fascinating about them - something very personal as they were made for someone to have some fun with maybe 500 years ago.