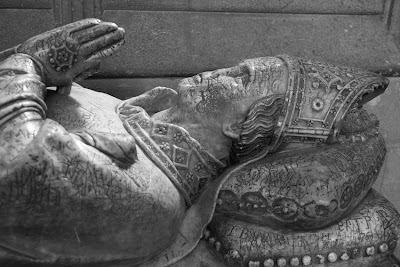 Poor Ralph of Shrewsbury. As Bishop of Bath and Wells in the fourteenth century, he did some good work. In particular, he built Vicars' Close to house the men of Wells Cathedral choir (thus keeping them away from the worldly temptations offered by lodgings in town). Having provided accommodation and a communal hall, he then gave land to provide an income. 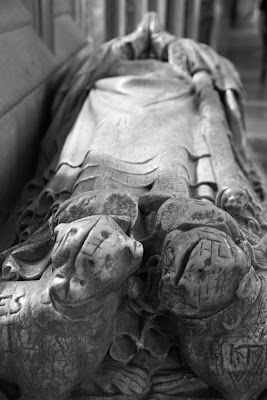 It seems only fair, then, that he should be remembered within the cathedral. Sure enough, he has a rather fine tomb with alabaster effigy - but it hasn't received the respect it perhaps deserved. Instead, every inch of it is carved with graffiti- even the dogs at his feet have failed as guards. Most legible names and dates are from the eighteenth and nineteenth centuries, but the process began in the sixteenth century when the effigy, once railed and in front of the high altar, was placed unprotected in its current location. Since it is alongside the choir, one suspects that choristers - for whom he showed such concern in life - may have been among those responsible. 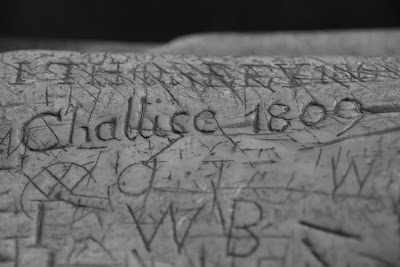 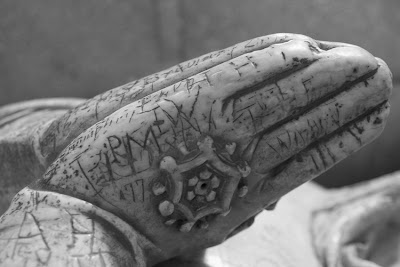 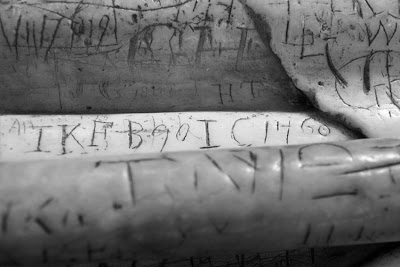 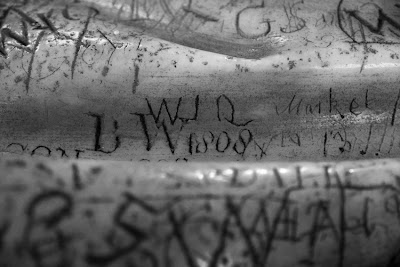 Isn't it amazing - I wonder what this drive is to leave one's mark. It can't just be the desire to be remembered, since Lord Byron is alleged to have left his mark on a Greek temple, and he was famous enough with his poetry (and other things). And my school desk lid must have been recycled a hundred years ago.

What is also amazing is the time people in the past must have spent carving their name into the stone. A recent visit to Lyveden New Bild makes one wonder if they turned up with a hammer and chisel or whether someone was hiring them out on the spot, so well and deep are the names and dates cut.

it's almost as if an attendant purpose of the effigy is its capacity to receive the marks as votive/devotional presences.

It is an interesting urge - I love the idea of someone hiring out the tools, Stephen!

I have come across suggestions that the graffiti were indeed supposed to have power as prayers. However, I wonder if the explanation may be generations of bored choirboys...

Poor old soul. I have never seem an effigy defaced like this before...maybe it took just one before everyone felt they could join in. I was at Hellfire Caves yesterday, Francis Dashwood's creation, and it's covered in the stuff.

Ralph looks as though his nose has suffered too - it is very flat against his face.

Graffiti is far from being a modern problem and many ancient monuments have been "decorated" with the names of obscure and otherwise forgotten commoners.

Of course, we deplore such defacing of monuments but, ironically, after a certain amount of time, these scratchings do themselves acquire an historial dimension.

Yes, the nose does seem to have come off especially badly, SilverTiger. The damage presumably happened quite some time ago, because there are no rough edges now.

Kate, it's ages since I've been to the Hellfire Caves so I did enjoy your post on it. At least chalk was easier to carve into!