A new development is being built at 8-10 Moorgate in the City of London and, like most such major projects, involves an archaeology dig. Yesterday and this morning, Museum of London Archaeology invited the public to have a look at the site and some of the finds. 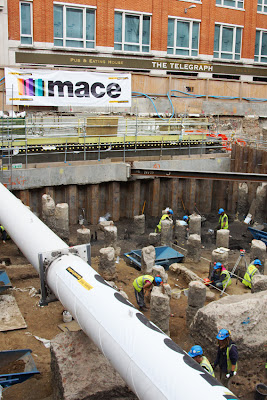 We know, but tend to forget, that the city is largely built upon bits of earlier city. Not only is there material evidence of this here, with traces of Roman and mediaeval occupation, but the difference in street level reinforces the point. The archaeologists are working at what would have been floor level to the Romans, but is well below the road today. 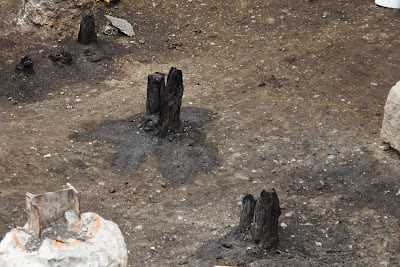 The Walbrook, one of London's 'lost rivers', ran through this site. Darker soil indicates areas of river or marsh, with lines of wooden posts marking revetments to hold the water in check; evidence of buildings has been found on the lighter dry land - not only wooden pilings but also a piece of stone wall were visible this weekend. 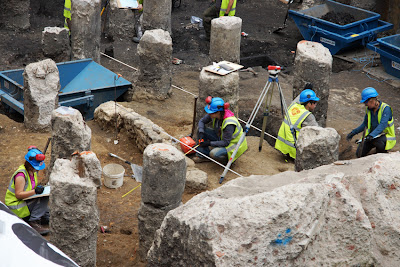 The Walbrook was important to the Romans. Londinium grew up either side of it, with the Temple of Mithras on its banks, and its waters possibly served as both drinking supply and sewer. The less-salubrious contents would have included industrial waste: the upper section of the Walbrook, marshy and liable to flood, was not good to live beside but did offer a suitable water supply for manufacturing, so the Romans set up glass, pottery and leatherworking businesses on its banks. 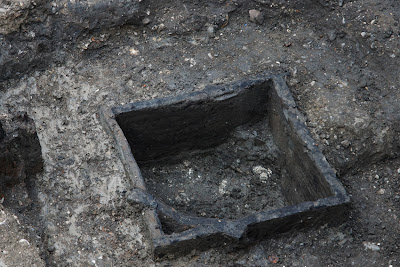 Particularly exciting to see was a well-preserved, square wooden Roman well. The waterlogging of the area may have made life a little more difficult for the builders and occupiers of the past, but it also preserved the organic traces they left behind: not only wood but also leather, for example. However, what makes the survival of this wood in good condition particularly significant is that dendrochronology may allow us to discover exactly when the well was built.

Used as a rubbish dump, built over, culverted by Bazalgette, and renamed the London Bridge Sewer, the Walbrook is now hidden from view. These remains of life along its banks will soon disappear too, as the site becomes home to yet another layer of building, but the public opening allowed Londoners a brief, tantalising glimpse into its past. 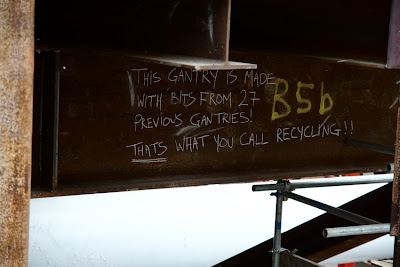 IanVisits was also there.

This is fascinating, Caroline! I would love to have seen that. :) I especially love the 27-century recycling note.