Best-known for its brutalist concrete bulk, the Barbican has also absorbed some historical treasures. (Whether they have been engulfed or integrated probably depends upon your view of the main structures.) 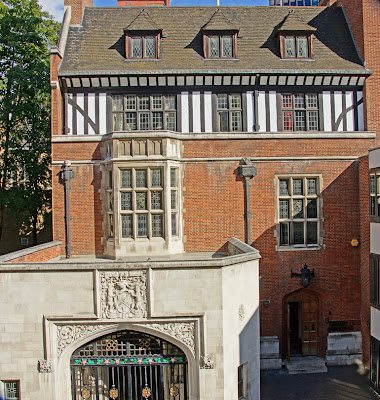 Among these survivors is Ironmongers' Hall, home of one of the City of London's livery companies. Although the Ironmongers have been around since the fourteenth century, their hall has been replaced several times over the centuries. Indeed, their premises' history is perhaps one of surviving against the odds only to face unexpected threats!

From 1457, their premises were on Fenchurch Street. They survived the Great Fire of London with nothing more than scorching. However, the next hall there, built in 1745, was damaged by a First World War bombing raid in 1917. The Company moved to Aldersgate Street, building new Tudor-style premises designed by architect Sydney Tatchell.


The current hall was built in the 1920s, as evidenced by a rather fine drainpipe dated 1924 (the building actually opened in 1925). Above the door is the company crest. It includes two lizard/salamander supporters; according to Walter Thornbury, writing in 1878, 'The lizards should properly be salamanders, but the Ironmongers insist on the lizards'. The significance of salamanders is that they were believed in the middle ages to be able to survive fire. 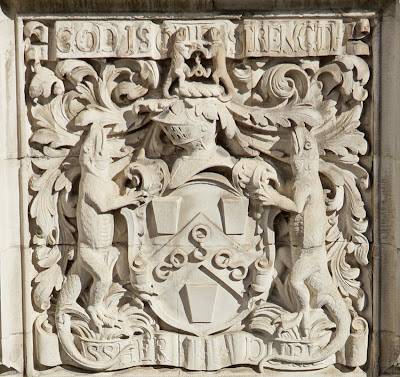 Amazingly, the ironmongers had better luck in the Second World War than the First: although the surrounding buildings were destroyed in an air raid in 1940, Ironmongers' Hall survived. A final threat would come in the 1960s, when compulsory purchase was suggested to make way for the Museum of London. Happily, the museum was built without harming the Hall, and both now coexist within the Barbican complex.

Ironmongers' Hall is so closely squeezed by the Barbican that I don't think the word "co-exist" really applies. It is seriously overshadowed by the huge complex.

The livery companies played an important role in the history of our city. Their professional importance has now dwindled and the main business of most is today charitable work, the halls being available for hire for conferences and "events". Their study, though, often proves fascinating.

I was photographing Skinners' Hall one day when a gentleman came out and, seeing the badges in my hat, asked if I would like a Skinners' pin badge. He kindly gave me one and I still have it.

I don't think I have ever seen lizards on a company crest before. Even if the animals should have been salamanders, lizards are a little bit creepy.

Never mind - the ironmongers' sculpture was beautifully crafted and better still, it survived! God must have been pro-British and pro-livery companies.

SilverTiger, that's a very good summary of the Ironmongers today: their focus is very much on charity work.

Hels, they are a little odd but I rather like them. (I should have mentioned that the Company today is clear that they are salamanders.)