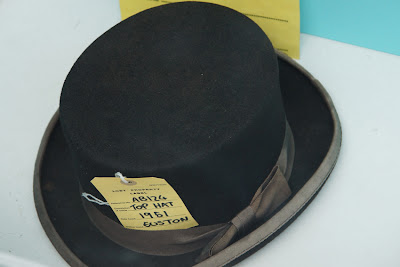 It's famous as the place our umbrellas end up - not to mention dentures, pushchairs and parcels - so no wonder TfL's Lost Property Office on Baker Street has an unusually interesting window display.

The capsule history of telephones is particularly appealing. It takes us from a rather robust set lost in 1936, through the brick-sized cellphones of the 1980s, to the much smaller portables many of us misplace today. 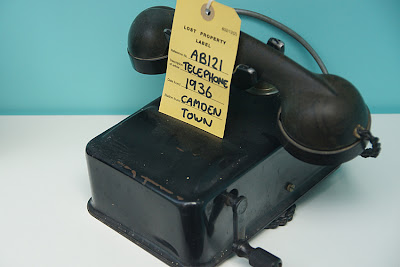 To the younger viewer, this phone may seem to be missing a keypad, but for those of us who remember real telephones it's the dial which is conspicuous by its absence. My first thought was of the era when calling somebody involved picking up the handset and asking an operator to connect the call. However, dial telephones were already becoming the norm by the 1930s: with its metal base and magneto handle, this is more likely to be some kind of field telephone. Turning the magneto would send a ringing signal to the other telephone or to an operator. 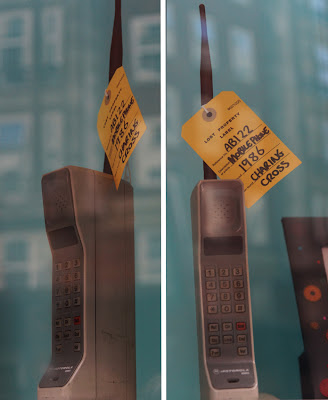 Half a century later, someone lost another kind of portable telephone - this time with no wires. The network was analogue, and the handset was anything but pocket-sized. There was a reason these were nicknamed 'bricks'!

Motorola had released their first phone, the 8000X, in Britain in 1985; this model, the 8000S, appeared a year later. Cheaper than the original, it still cost around £1,000 and weighed nearly a kilogram. Nonetheless, there were over 50,000 mobile phone users in Britain by 1986. See the Motorola in action in this wonderful promotional video:

I have twice forgotten a bag on a train. Recovery was successful the first time but not the second. However, I did at least attempt to recover my lost property and what seems strange to me is how many people fail to retrieve valuable or seemingly essential items.

A friend of mine was an early adopter of the radio phones that were fitted to your car. He suggested I call him on it to see how it worked. His car was parked in front of the house but when I called the number, the operator told me it was currently unavailable and suggested I contact him via the normal telephone service. They didn't show that in the advertisements!

Since then, not only has the mobile phone become so small that it slips into a shirt pocket but from being a vanity accessory for the affluent it has become so essential to most people that a failure of the network causes disuption and even danger to thousands of lives.

I once left my phone on a train, but luckily got it back. A bag left on the bus just disappeared, though - although the contents included my favourite cardigan, I suspect they didn't seem worth handing in. It does seem strange that items as expensive as that mobile phone were just left; perhaps the insurance payment seemed preferable? (Maybe the user had the same reception problems as your friend!)