The City of London is well-supplied with churches, but St Katharine Cree is the only Jacobean survivor. It was built in 1630, although the tower is over a century older and survives from the previous building. The unusual 'Cree' in its name is a corruption of 'Christ Church'. 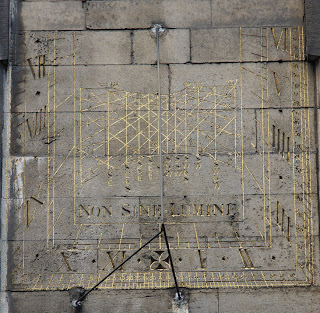 William Laud, Bishop of London, consecrated the church. In 1633 he became Archbishop of Canterbury - and in 1645 he was executed for treason. His attempts to enforce religious uniformity throughout England had helped to precipitate the English Civil War, as he persecuted Puritans for failing to conform. The service he gave and vestments he wore to consecrate St Katharine Cree became evidence of Catholic sympathies in the case against him.

The church has had a happier history. It survived both the Great Fire of London and the Blitz. Today, it is Ward Church for Aldgate and a Guild Church of the City of London. 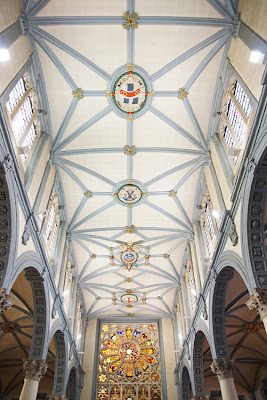 The interior is an unusual mix of classical and gothic elements, reflecting changes in architectural styles at this period. Ceiling bosses showing the arms of livery companies were added during a restoration in 1962. Among the memorials is the monument to Sir Nicholas Throckmorton, Elizabethan diplomat, which survived from the earlier building.  Its inscription is a reminder that spelling had not been standardised in 1570, as it concludes 'HE DIED THE XII DAYE OF FEBRUARY IN TEH YEARE OF OUER LORDE GOD A THOWSANDE FYVE HONDRED THREESCORE AND TENNE BEING OF THAGE OF FYFTIE AND SEAVEN YEARE.' 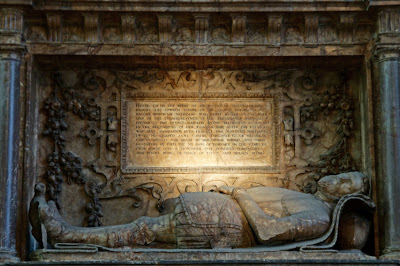 Another intriguing memorial commemorates Samuel Marshall, church organist, who died in 1714 and was buried under the organ, facing the centre aisle. I haven't been able to find out any more about him yet, which is a pity as the inscription hints at a larger story. First, it praises his career as 'a Bright Scholar ... Ornament to ye Choir of St Pauls ... Exquisite Organist of THIS Church, & Master to Other good Organists. His very Artful, Solemn, & Moveing Compositions and Performances ... Great Name and Esteem'. However, it goes on to say he 'Suffer'd much by Over Credulity, Excess of Modesty, & Good Nature & By false Reports'. A loss of faith is even hinted at, until in his 'last Languishing Illness', he 'regain'd that Spirity of piety, for which HE had Been EARLY distinguish'd' so that his last word was a fitting 'Amen'. 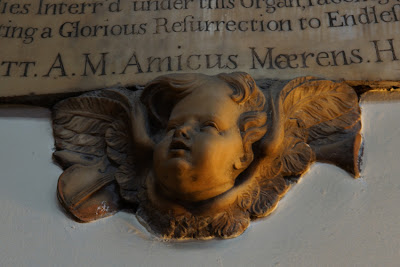 This is a church I have so far missed. I must try to visit it one of these days!

I visited purely by chance - I was walking past it on my way to another building and saw it was open for Open House weekend.

Just found the missing piece of the monument of Sir Nicholas Throckmorton.
http://ornamentsnijder.blogspot.be/2016/12/ontdekking-van-het-familiewapen-van-sir.html