The lovely Ariel sign in Kennington Lane is one of London's best-known, although the company it advertises and the 'Writers' shop it belonged to are now gone. Ariel were bicycle and, later, motorcycle manufacturers and, as the sign says, 'Leaders of Design'. In fact, the company had two beginnings: first, a partnership between James Starley and William Hillman, it introduced bicycle features such as spoked wheels. It was then amalgamated into Rudge-Whitworth and the name disappeared - only to be resurrected by Dunlop. In the 1890s, they had a near-monopoly on inflatable tyres, and their entry into cycle manufacturing as well caused great concern among competitors who were using Dunlop's products on their wheels and didn't want to advertise a rival. Dunlop therefore renamed its cycle-making section Ariel.

When Ariel was in turn taken over by Cycle Components Manufacturing, it quickly turned to making motorised vehicles. The first such tricycle came in 1898; a motorcycle followed in 1901. The company continued to manufacture motorbikes until its closure in the 1960s.

Sebastien of Painted Signs and Mosaics makes a convincing case for the sign having been painted in the 1950s, and Ghostsigns traces the slogan back to 1951. The equine logo was designed in the 1930s, and there is a rider on the horse's back although it has now virtually faded away.

There are other treats to be seen in this spot. Visible in the photograph is the sign's neighbour, the Durning Library, with its fine Victorian building. It is named for Jemima Durning, a philanthropist who endowed the library, and shared Tate Britain's architect Sidney R J Smith. 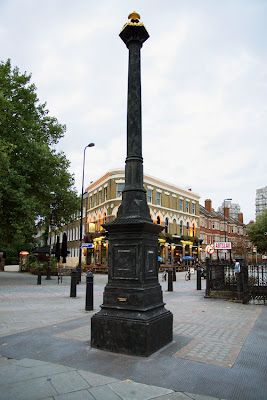 Just across the road is a Victorian public toilet - now closed, but being transformed by Friends of Kennington Cross into an arts venue. Although the facilities are underground, there is a very fine cast-iron ventilation pipe at street level. Among the features of note are the proud crown at its summit and the manufacturers' mark near the base. While Glasgow foundries dominated this market, our ventilation pipe bears the name of B Finch & Co of Lambeth, sanitary engineers.

One of London's best without a doubt.

Great to see this sign, thank you. I did a short post a while back about a stick-on sign for Ariel motorcycles in a shop window in Frome. I didn't cover the origins of the company, though, so I've been fascinated to read about its links with Dunlop.