In the nineteenth century, Spitalfields had a thriving Jewish community with a number of institutions. Most of these have now closed down, and many have disappeared, but Sandys Row Synagogue is very much alive. 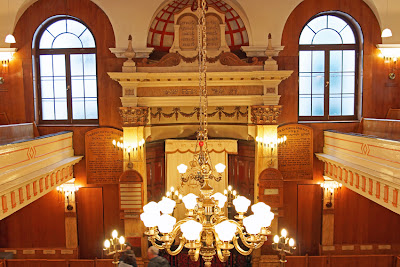 This year, it welcomed Open House visitors for the first time; it also has an exhibition of photographs of Spitalfields taken one day in 1912, which runs until February next year. The exhibition is lovely - there's an online preview here - and the building is a real jewel.

Sandys Row is the oldest surviving Ashkenazi synagogue in London. The site had been bought by Huguenots in 1763 and dedicated as a church in 1766. It was later converted to a Baptist chapel, but in 1867 the leasehold was acquired by the Society for Loving-Kindness and Truth. This mutual aid society had been formed a decade earlier by fifty Dutch-Jewish families, many of whom worked in the local tobacco trade. They had now outgrown their rented premises, and N S Joseph remodelled the building on Sandys Row.  The entrance was moved from the east to the west of the building, but much of the Georgian interior was retained (helpfully, there was already a balcony) and a new office building was added.

The architect, Nathan Solomon Joseph, was a local man, having been born a short walk away in Minories. However, his life was very different to that of the working-class Sandys Row congregation. He was a civil engineering graduate, brother-in-law of the Chief Rabbi, and became the leading synagogue architect of his generation. Nonetheless, he was also very interested in social issues, education and public health, and worked on projects such as the Four Per Cent Industrial Dwellings Company. While he excelled at 'cathedral synagogues', he also supported small East End congregations: hence his work on Sandys Row.

Joseph clearly disagreed with his brother-in-law on this issue. The Chief Rabbi had opposed this new synagogue, serving a poor, migrant community, and had refused to be associated with it. (Many larger synagogues felt that these congregations should accept free seats in existing establishments rather than founding their own.) However, the society were undaunted and Sandys Row was consecrated by a leading Sephardi rabbi instead. By the late nineteenth century, it was one of the largest congregations in the East End.

Later in the twentieth century, the congregation declined, but it has enjoyed a recent revival. Renovations have been completed - in particular, the roof was in a perilous condition thanks to wartime bomb damage but has now been replaced - and various significant pieces of the synagogue's history have been discovered and restored. Both the inception plaque listing 50 women's names and an embroidered velvet bimah cloth celebrating Queen Victoria's diamond jubilee bear witness to the significant role of women in the nineteenth-century congregation.

Practical info: the exhibition is open until February 2013, most Sundays, 10-4pm. (Check the online calendar for dates and times.)

Beaut post, particularly since one of my four grandparents were raised in the East End. I wish I had asked her which synagogue the family went to.

I immediately added a link about the photographic exhibition of Spitalfields, many thanks.

Thanks for sharing this. Very interesting history.