Think of a London bomb shelter in the Second World War, and the most common images are tube stations or Anderson shelters. However, for many people in south-east London and beyond, their shelter was a 22-mile complex of chalk caves in Chislehurst. (In fact, they are really tunnels, having been created by many centuries of human labour rather than natural forces.) 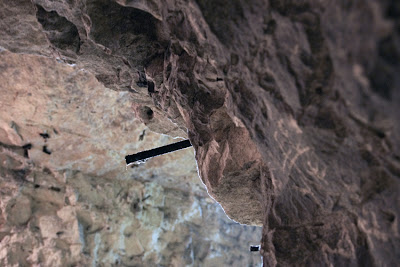 15,000 people could shelter here, making the caves more populous than many towns. It's unsurprising, then, that the amenities extended beyond bunk beds to include canteens, cinema, a hospital and consecrated chapel. There was even a barber shop! Electric light - no longer in place - made the extensive tunnels easier to navigate and live in, while fans circulated air. While the caves offered excellent protection, there were disadvantages to being so far underground. One of these was the lack of plumbing, with chemical toilets the most advanced form of sanitation practicable. 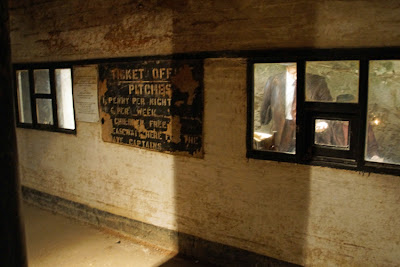 Pitches were paid for at the entrance; the pitch numbers are still visible on walls throughout the caves. Each had a triple-decker bunk bed, the family's 'home' for the night. For some who had been bombed out of their houses, their pitch was in fact their home. One baby was even born here, and was given the middle name 'Cavena'. 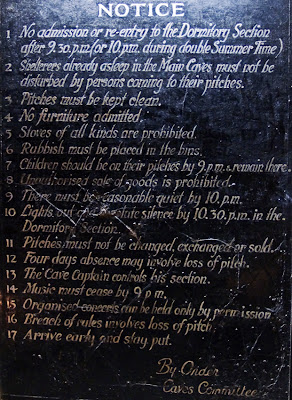 Rules for those taking shelter were strict - understandably, if sharing space with so many others was to be tolerable. Cleanliness, quiet, and the prohibition of commercial activities formed the core of the rules. Bedtime for children was 9pm; quiet was required after 10pm; and lights-out was at 10.30. Volunteer 'cave captains' supervised sections, and breaking the rules could lead to loss of the pitch.

Its time as a shelter was just one episode in the eventful history of this network of tunnels. It has also been an ammunition store, mushroom farm and concert venue, as well as a source of chalk. Today, the caves are primarily a tourist attraction, offering the atmospheric experience of a walk through tunnels lit only by paraffin lamps.

Is it a British thing, this love of precise rules? I see it is fully booked for Halloween - bet it's spooky down there!