'A brilliant success': the London to Brighton Run

When the Locomotives on the Highway Act 1896 was passed, it dramatically changed British motoring: no longer did cars have to be preceded by a man carrying a flag. To celebrate, the first London to Brighton Run took place - an event now repeated annually by pre-1905 vehicles. The day before they depart, a selection are exhibited on Regent Street. I've visited before, and returned this year to admire and photograph the cars.

As for the run itself, images of the original event were published in the Daily Graphic. There's a gently humorous picture of a breakdown - the motorised tricycle was still on the Embankment at the beginning of the run!   Luckily, there were plenty of willing hands to give it a push, as the event was watched by 'tens of thousands' of Londoners, sometimes up to nine or ten deep on the roadside. Less fortunately, the masses of onlookers slowed progress so that a number of engines overheated. Only after Croydon 'when the open country was reached ... the keen, excited throng gave way to straggling onlookers'. 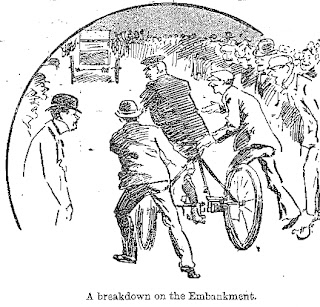 Another sketch cheekily shows the motor vehicles being overtaken by bicycles and a horse. Since the speed limit was 12 miles per hour, that perhaps doesn't reflect on the cars so much as the law. (The Graphic's correspondent, who rode in one of the cars, suspected that it had reached illegal speeds descending some of the hills, while the most modern machines managed 25 mph.)

It wasn't only speed which these new machines offered. Steering was also much easier than in a horse-drawn vehicle. 'It would have been impossible for the most expert whip to have performed with horses the feats which my host was compelled to perform in the crowded traffic along the Brixton Road. ... The cyclists, in especial, seemed to be devoting themselves to courting the risk of death.'

These early vehicles may have been fast and manoeuvrable, but they were far from reliable. 'Many of the cars advertised to start did not get off at all, even if they reached the starting place.' Many more were lost along the way. However, some of the cars proved a little more reliable and the Graphic shows their soggy arrival at Brighton. It reports that 'of those few that succeeded in getting all the way to Brighton most arrived long after dark, cloaked in mud, and their occupants drenched with rain.' 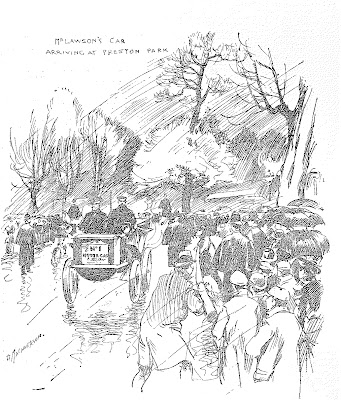 Nonetheless, the Graphic's special reporter - clearly something of an enthusiast himself, and having thoroughly enjoyed his own drive as far as Reigate - concluded that 'the demonstration was a brilliant success.' He ended the article with an accurate prediction for the future.

The industry, it is quite obvious, is only in its infancy. An intense amount of experimental work has yet to be done before an entirely satisfactory vehicle can be put upon the market, but enough has already been done to make it clear that a reasonably perfect motor will be with us in the near future, although possibly it may not be in the least like any of those that were used on Saturday.

The Daily Graphic report comes from an original copy of the newspaper, kindly sent to me by historic newspapers. They have an amazing collection of regional and national newspapers, with some dating back to the seventeenth century. As well as providing various gift options for birthdays and anniversaries, historic newspapers also have a historical research team. I was very impressed by the condition of the newspapers, as well as the gift box and tissue wrapping in which they were packaged.