Marylebone Station, the Great Central Railway and the Channel Tunnel

The grand name of the Great Central Railway might suggest that it achieved lofty things on long-distance routes. However, as is often the case, the boast contained in the name was never really matched in reality. Nonetheless, it has left a permanent mark in London. 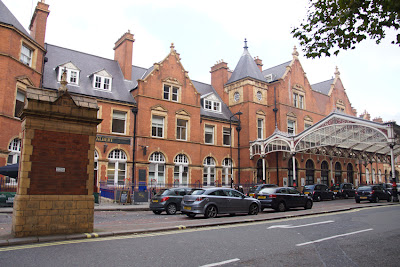 Marylebone Station was formally opened on 9 March 1899 (with services beginning on 15 March) - the last of London's mainline terminal stations. Lines from the north were not allowed to have termini further south than Euston Road, hence the famous alignment of King's Cross (1852), St Pancras (1868) and Euston (1837) along the north edge of that thoroughfare. It continues west as Marylebone Road, with Paddington Station (1838) at its end; but after all these had been built, there was resistance to further stations in central London. 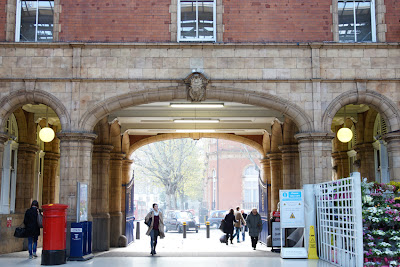 The Times reported the opening, but paid much more attention to the railway stock than the station itself. That's a little unfair, as it is an appealing station even if smaller in scale than its more famous neighbours. (The original plans had to be scaled back significantly for budgetary reasons.) The new trains do sound rather good, though: 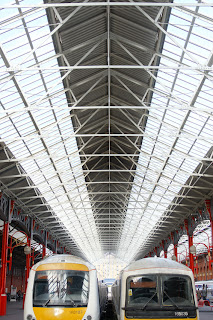 These trains were made up of the new and luxurious stock which the company has had constructed for the purposes of the new line. The carriages, which all have corridors giving free passage along the whole length of the train, run upon four-wheeled bogies, and are fitted with Gould's vestibule and automatic coupler, Gresham's direct system of steam heating, communication between passenger and driver and guard by means of the automatic vacuum brake, and electric communication between passengers and attendants. Every effort has been made to reduce oscillation as far as possible, and the smoothness of running attained is a tribute to the design of the coaches as well as to the excellence of the permanent way provided by the engineers.

All the carriages, whether first-class or third-class, are handsomely decorated and comfortably fitted, practically the only differences between them being the more elaborate adornment of the former and the rather greater elbow room allowed to the passenger who has paid the higher fare. The dining-cars of both classes are lighted by electricity supplied from dynamos driven from the axles, while the other carriages are provided with Coligny lamps burning oil gas. All these carriages ... are painted in the new colours which the Great Central Railway has adopted for the exterior of its stock, the upper panels being French grey and the lower ones brown, varnished and picked out with gold lines and emblazoned with the company's new coat-of-arms.

The new line ran from Nottinghamshire to London, and was intended to provide a fast connection between the Manchester, Sheffield and Lincolnshire Railway's services and London. When their London extension was about to open, the MS&LR change its name to the Great Central Railway to reflect this national coverage. The initials GCR can still be seen in Marylebone's decoration. 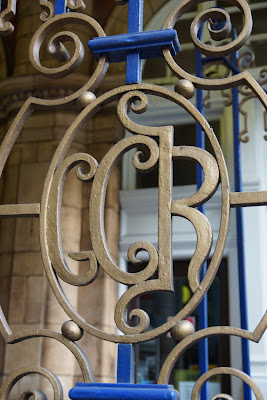 In fact, financial success was initally elusive - not helped by the line costing triple its £3.5 million budget - and the line eventually ended up carrying more freight than passengers. One intriguing aspect of the company's fortunes is that in building the line, they had carefully taken account of future compatibility with European trains. The company chairman Edward Watkin was also on the board of a French railway company, Chemin de Fer du Nord, and was behind a scheme to build the channel tunnel. He therefore envisioned the line being part of a railway network extending far beyond Britain.* However, the tunnel project was later abandoned  as a potential threat to national security and would only be completed in 1994. Most of the Great Central's route was closed by Beeching in the 1960s, and today Marylebone is the terminus for Chiltern Railways which goes only as far north as Birmingham.
____________________________

The Times report comes from an original copy of the newspaper, kindly sent to me by historic newspapers. They have an amazing collection of regional and national newspapers, with some dating back to the seventeenth century. As well as providing various gift options for birthdays/anniversaries, historic newspapers also have a historical research team. I was very impressed by the condition of the newspapers, as well as the gift box and tissue wrapping in which they were packaged.

* Thank you to Alan Burkitt-Gray for providing this information in his comment below.

Marylebone is one of my favourite stations. Standing outside waiting for the 205, I always have to admire the huge canopy that allows people to move between the station and the hotel without getting wet on rainy days.

We have started some of our most enjoyable expeditions from this station so it always evokes happy memories.

It wasn't just that the GCR took account of European carriage sizes. The chairman of the MS&L, who grew it into the GCR, was Edward Watkin, who also chaired the Metropolitan Railway and the Southeastern Railway, and was on the board of France's Chemin de Fer du Nord (which built Gare du Nord). His ambition was to link up all his lines -- GCR onto the Met in London, across London (via the Thames Tunnel to New Cross, maybe) to join up with the SER, on to Dover and via a Channel Tunnel to CFN into Paris. He was behind the Victorian scheme to build a tunnel: the abandoned workings were still there until taken over by the 1980s construction project.

SilverTiger, it is lovely - and always seems to have been considered peaceful and appealing, in part because of its relatively low passenger numbers.

Thank you, Alan - I knew the Victorian project was a factor but didn't know about Watkin's French position, or that he was behind the Victorian tunnel. I'll amend the main text.

As the Great Central was the last main line to be built, it's construction was recorded by a Leicester photographer S W A Newton. His collection is now held by Leicestershire County Council. I believe that it is a unique collection as it records all aspects of the construction of the line.

Caroline
Watkin was also, I think, the guy behind the development of Wembley. There's a bit in John Betjeman's Metro-Land TV programme about it. He wanted to build a tower to rival Eiffel's, but ran out of money after the first stage. Wembley stadium is built on the site, according to JB.

Ah, yes, I should have recognised the name since I posted about the Great Tower for London a while back!

It is a lovely building. Many of the older stations are.