My very occasional series on interesting signs, increasingly misnamed as 'signposts', is back with a London example. This sign is on the south west corner of Tower Bridge, reminding us that the landmark is also part of the A100 road.

The system of letters and numbers designating certain roads was a side-effect of road and petrol taxes. With motorists now providing money for roads to be maintained, the government needed a way of identifying those roads and indicating which were busiest. Originally designed for Ministry of Transport use, the numbering system also promised to be a useful way for drivers to navigate the road system so it was released to the public in the 1920s. 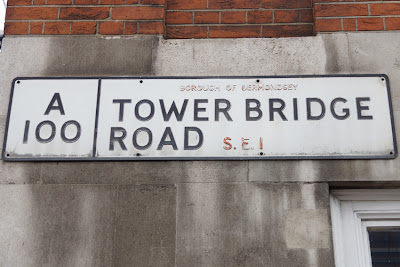 The Metropolitan Borough of Bermondsey existed between 1900 and 1965, before being absorbed into Southwark. We therefore know that this sign is over 45 years old. (The liberal use of full stops would also have suggested that!)

There are other surviving reminders of this now-defunct borough, including a film promoting its activities. As wonderful as the social history it contains is the revelation that the council had departments known as 'Health Propaganda' and 'Gardens and Beautification'.