On the road outside Temple Meads Station in Bristol is a fine but neglected piece of street furniture. At first glance, I thought it was a stinkpipe as there are no fittings at the top. A second look suggested that this is in fact a lamp post - albeit one now missing its lamp. However, further research led to the information on Flickr that it is in fact a tram pole. Indeed, there's a photo of it in use here. 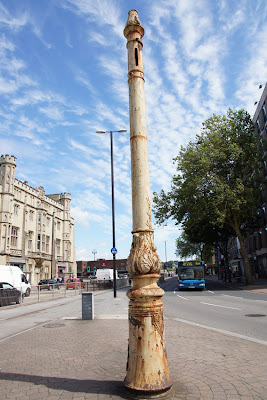 The decoration on the pole is rather good. As well as some very nice leaves and berries around the column, there is a more geometric design at the base. The rust may speak of a lack of care, but it does also highlight some of the detail. 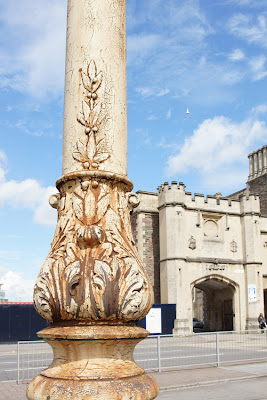 This pole is a tangible reminder of a time when the city was at the forefront of public transport. In 1895, it was one of the very first British cities to introduce electric trams, with the whole network electrified by 1900. (For twenty years before that, there had been horse-drawn trams.)

In the late 1930s, it was decided that the extensive tram network should be closed in favour of bus services. In fact, it continued to operate until its power supply was destroyed during bombing of the city in 1941. The trams are now largely forgotten: a sad contrast to the large celebrations which had marked their opening.

Comparing the pictures, it doesn't look like the same pole to me. Is it tall enough to be a tram standard?

I'm pretty sure it is the same post - there's some kind of cladding around the bottom so I can't be certain, but the top looks the same and the location is identical. It's tall: the photo is perhaps a little misleading on that.

Trams are funny things - they look as though they don't know whether they are coming or going. And were we a hardier breed in those days? An advert on one tram says "Wear an Anderson Guaranteed Waterproof and Ride On Top""!!!