60 years ago today, the 'Great Smog' enveloped London. To mark the anniversary of that miserable event, which killed an estimated 12,000 people, I'm republishing a post from 2010 telling the story of London's'pea-soupers'. 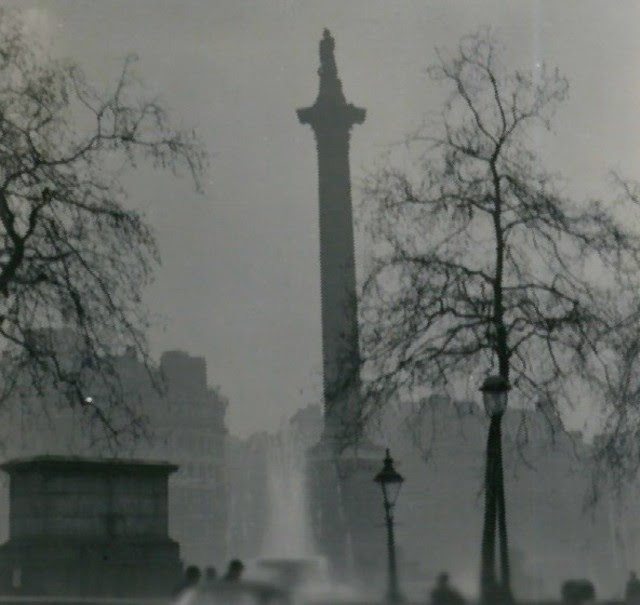 There were two London Particulars: the thick smogs which enveloped the city and an equally thick pea soup named after them. The tribute was apt: Londoners referred to their fogs as 'pea-soupers'. In Sherlock Holmes' Adventure of the Bruce-Partington Plans, Dr Watson described one thus:

In the third week of November, in the year 1895, a dense yellow fog settled down upon London. From the Monday to the Thursday I doubt whether it was ever possible from our windows in Baker Street to see the loom of the opposite houses ... when, for the fourth time, after pushing back our chairs from breakfast we saw the greasy, heavy brown swirl still drifting past us and condensing in oily drops upon the window-panes, my comrade's impatient and active nature could endure this drab existence no longer. ...

"Look out of this window, Watson. See how the figures loom up, are dimly seen, and then blend once more into the cloudbank. The thief or the murderer could roam London on such a day as the tiger does the jungle, unseen until he pounces, and then evident only to his victim."

It's hard for those of us brought up with relatively clean air to imagine what these smogs were like. A thick yellow blanket of coal smoke mixed with damp air, they literally killed people. Even for those not choked by them, there was the terrifying experience of not being able to see vehicles, familiar landmarks, or the ground beneath one's feet. Londoners got lost, fell over, and relied on street lamps burning all day to help them navigate. The Victorian city had streetlights: the smog was what gave its darker side that ominous gloom.

These fogs persisted into the twentieth century, as houses, factories, gasworks and power stations continued to burn coal. The Great Smog of 5-9 December 1952 killed 4,000 people in a matter of days, and perhaps three times as many in total. There was no escape: it made its way indoors, polluting rooms and causing or aggravating respiratory conditions. Some people also died from falling into the now-invisible Thames. Outdoors, people covered their noses and mouths with handkerchiefs or scarves. Performances were cancelled due to poor visibility and coughing audiences, road transport became impracticable, schools closed. At its thickest, visibility was so low that people couldn't see their own feet. Nickel in the Machine has a collection of photographs, with eye-witness accounts in the comments.

Parliament was prompted to act, and the Clean Air Act 1956 marked the beginning of the end for the genuine London Particular. It lives on in benign form as a cultural reference, an evocation of Holmesian atmosphere, and a rather nice coffee shop.

I knew that smog was bad but not so bad that it killed that many people in 1952! My mother-in-law is having a birthday today and she will be 85. Since she is from London, I will ask her if she remembers this.