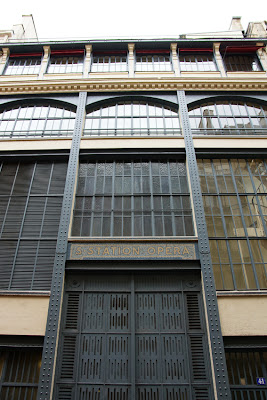 A wrong turn led to a chance discovery, as I happened across a rather special Parisian building. The Opera sub-station was the first of its kind for the Metro system, converting high-voltage alternating current into low-voltage direct current. The ground floor held the machines which converted the current, while secondary batteries (used to power both the machinery and the metro's emergency lighting) were on the first floor. They are linked by a spiral staircase still visible through the windows; the second floor is a later addition. 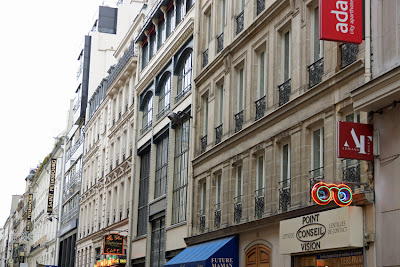 The building blends elegantly with its surroundings; even the mosaic sign looks more stylish than practical. However, a peep through the grating confirms its industrial nature. 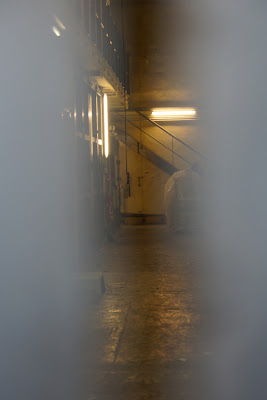 The sub-station was the work of Paul Friésé, an outstanding industrial architect who had already designed several power stations. He built the sub-station in 1903 as part of the network's move to its own power supply. When the metro first opened in 1898 it took its electricity from other generating companies, but it was already building a power station at Bercy. That produced alternating current at 12,000 volts (direct current won't travel long distances). Since the network used direct current of considerably lower voltage, sub-stations were needed. Friésé built both power station and sub-stations; prompted by my Opera discovery, I visited another example at Bastille. 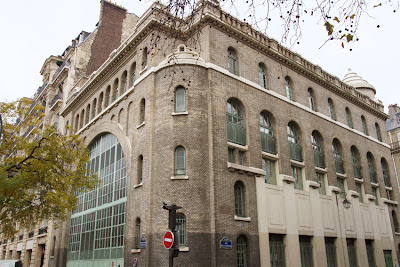 This sub-station, designed by Friésé in 1911, again fits stylishly into the cityscape. Its clever use of arched windows and occasional notes of whimsy, such as the turret at one corner, testify to Friésé's talent. 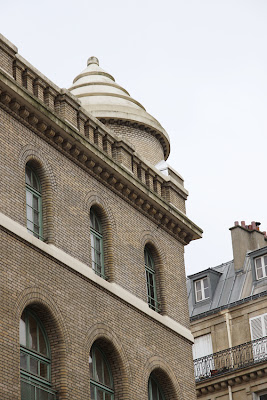 With a new system in place, and such attractive housing for it, this should have been a golden moment for the metro. However, it coincided with one of its worse tragedies, the Couronnes disaster.

On 10 August 1903, a short-circuit under a train caused a fire. The original flames were quickly put out and the carriages evacuated. The passengers moved into the next train, but when the burning train became unable to continue on its own, the second train was emptied of passengers so it could push the first down the line to the terminus. However, the damaged motor was still in contact with the live rail: there was no way of disengaging it. The fire re-erupted at Menilmontant station and this time, it could not be brought under control.

Meanwhile, the two trains' passengers had got into a third train, which now stopped in Couronnes station. The passengers were told to leave both train and station, but there were problems. First, the crowd (many of whom were now extremely fed up at being forced to leave three trains in turn) stopped to argue about fare refunds. Secondly, smoke from the tunnel suddenly began to fill the station. In an attempt to avoid it, many moved away to the far end of the platform - which had no exit. Matters were made worse by lack of light as the power supply failed. When firemen were finally able to enter, they found 84 asphyxiated bodies - 75 at Couronnes, the others at Menilmontant or in the tunnel.

The disaster led to fundamental changes designed to improve safety. These included the provision of emergency lighting, clear signage, and emergency exits. Drivers' cabs were built of metal instead of wood, so they would catch fire less easily. The provision of power to the trains was also reviewed, in particular so that the supply to sections of track could more easily be cut altogether. In this atmosphere, the reassuring appearance of Friésé's buildings on the city's streets must have helped to restore shaken public confidence in the new transport system.

As for Friésé himself, his architectural work ended when, aged 63, he enlisted as a military interpreter at the outbreak of the First World War. He was wounded on the western front and died of his injuries in 1917.

His buildings are no longer operating as substations, but continue to be used by the metro system. 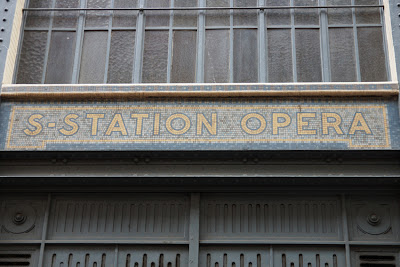 Further reading: there is a detailed account (in French) of the Couronnes disaster here.

Not quite, Caroline. Metro trains with live rails need low voltages, but if you carry low voltages over long distances you lose a lot of energy.

So you need to convert somewhere from high to low voltage, and this is a lot easier if you generate HV AC, deliver it to somewhere near the track, then convert to LV AC where short-range losses are small, and then convert AC to DC to feed into the track.

Thank you! This is what comes of trying to summarise too briefly, especially on a point I have only very basic knowledge of...