Members of the Cutlers' Company made swords, scissors and knives as well as cutlery. By the late nineteenth century, when this frieze was sculpted, their work in the City had largely moved to surgical instruments. It is the work of Benjamin Creswick, a former apprentice knife-grinder until ill-health forced a change of career. He initially taught himself modelling, before becoming a protege of John Ruskin.

Here we see the forgers - on the left, hot scissors are being plunged into the hardening trough; another man is forging scissors while the next is working the bellows. Those to the right are forging table knifes as more steel is delivered to them. (Click images to enlarge.)

Now we are at the grinding stage of the process. The blades are ground, polished and checked for smoothness; then we see more grinders as well as men bringing more work and a new grindstone.

Hafters make handles for the knives. Here they file them, fill them with compound, polish them, then drill, shave and rivet them.

The final panel once again shows scissors being made. They are hardened in the fire, bored, glazed, finished and tested.

Creswick's personal knowledge of the trade must have informed his work on these panels. He has also included hints of the workers' lives as well as their actions: a man remonstrating with another as he works, a child watching his father whose dinner he has brought.

When the frieze was sculpted in the 1880s, it was already a record of the past. Most production had moved to Sheffield, although about thirty cutlers did still work in the capital. Today, they have gone - Wilkinson closed their Acton sword factory in 2005 - and the Cutlers are as concerned with charitable activity as with the making of blades. There is a well-known reminder of their former influence, however: Elephant and Castle is named for the company's crest. 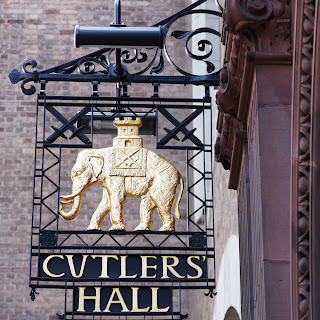