At first glance, the Monument appears to have taken a walk and settled somewhat closer to St Paul's Cathedral. However, even a cursory second look is enough to spot that this column is not only different but also significantly smaller (23 metres rather than 62 metres). It's the central feature of the cathedral's neighbour Paternoster Square. 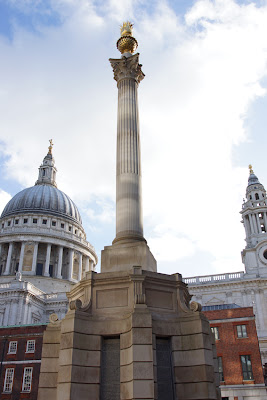 How do you design a structure which will complement St Paul's? The answer for architects Whitfield Partners seems to have been to look to Wren's other work as well as the Cathedral's history for ideas. The result, this column, appeared in 2003. The stonemasons responsible were CWO, who have also done restoration work on the nearby Temple Bar as well as on the Monument itself.

The Paternoster Square version is apparently a replica of Inigo Jones's columns on Old St Paul's Cathedral, but the parallels with Wren's work are perhaps more obvious. It even has an urn of flames at the top. This commemorates two fires which destroyed the area - the Great Fire of 1666, and the Blitz of late December 1940 which saw not only buildings but also huge numbers of books destroyed in what was then Paternoster Row, a centre of the publishing industry.

The most obvious distinction, size aside, between the two columns is the very different base of the Paternoster Square column. There is a good reason for this: it is not purely decorative, but also provides ventilation for the car park below.

Is this a thoughtful response to an eminent neighbour and its history, or an unimaginative if fairly uncontroversial response to the site? I'm really not sure ...

More straightforwardly pleasing is the sculpture by Elisabeth Frink, Paternoster. It refers to the site's past as a livestock market as well as its religious significance.

I think it looks fine, and in keeping with its surroundings, to judge by the photos. Imagine if it had been designed by the architects of "The Shard"!?

When my father and I went to London we first thought the column was the Monument and we took maaaaany photos of it :)

I love the water feature on this monument: I see it as a fitting counterpoint to the two fires it commemorates. I feel Wren would have seen the monument as a complement.