Who invented cinema? It's a controversial question - but one memorial in Highgate Cemetery claims to have the answer. Even after dark, this inscription stood out as I walked along neighbouring Swain's Lane: 'The grave of William Friese Greene, the inventor of kinematography'. The monument was designed by Lutyens and paid for by the film industry. 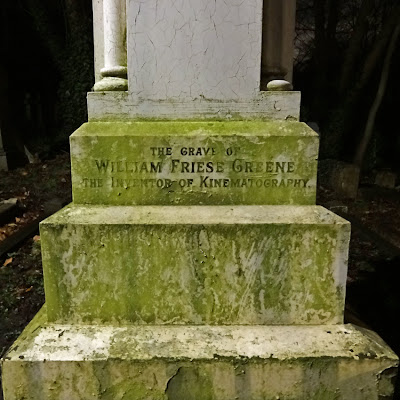 Friese-Greene began his life in Bristol, where he was apprenticed to a photographer at the age of fourteen. He soon set up his own studios, expanding to Bath, Plymouth, Brighton and London. By 1886 he was experimenting with the creation of moving images, beginning with glass plates before moving on to celluloid. His claim to have invented the moving picture camera is based upon the 1889 patent for a chronophotographic camera which used perforated celluloid film and took up to ten photographs a second. It wasn't terribly reliable, however, and made little contemporary impact. Nonetheless, the experiments continued - despite his going bankrupt in 1891.

Today, Friese-Greene is best remembered for his next big advance. He developed the Biocolour system, which created colour film through shooting in black-and-white through successive coloured filters. Alternative frames were then stained red or green, giving the illusion of a colour image. It wasn't perfect, often giving the subjects red or green fringes; but what really doomed it was a prior patent on another system, Kinemacolor. Only after winning a court case on appeal to the House of Lords in 1914 could he properly use Biocolour. In fact, it was his son Claude who would go on to develop the system and produce films in the 1920s - recently shown by the BBC as The Lost World of Friese-Greene.

William Friese-Greene himself died at a London conference in 1921. His reputation since then has gone up and down: in a 1951 film, The Magic Box, all his most optimistic claims for his inventions were accepted at face-value, while the mood changed in the 1960s when those claims were discredited. Today he is recognised once again as a pioneer, if not the inventor, of early film although his exact role is controversial. At the very least, as the BFI's Screenonline biography concludes, 'As a dreamer more than as an inventor, he has his place as a founding father of British film.' 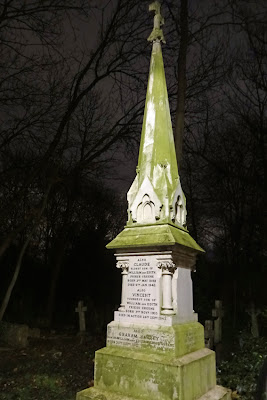 As well as the Highgate memorial (shared by Claude), there is a plaque on the site of his studio and laboratory in Chelsea and another on  his former studio in Brighton. Sadly, his birthplace in Bristol was demolished in 1958 to provide car parking although he has several plaques in the city.

Friese-Greene went to Queen Elizabeth's Hospital school in Bristol. When I was there, the Orpheus Cinema plaque in your link, which from memory was cast aluminium, lived in the Art School. The Art School was the former Brandon Hill police station. I've no idea what happened to the plaque after the building was sold.

Thank you, that's interesting - I wonder what has happened to it.

Is there an original source for the claim that his grave was designed by Lutyens? I know Wikipedia says so, but looking at it, I would bet a large sum that it was nothing to do with him.

Not just Wikipedia! Both the London Encyclopaedia and London: A Cultural History (Richard Tames) make the same claim. Unfortunately, neither cites a source. If you do find the origin of this claim, and whether it's true or not, I'd be very interested to know.

Does anyone have any information on Williams second wife Edith Harrison. I am investigating my family tree and there is a link somewhere to him. He appears in the 1901 census as living at Dovercourt, Essex with Edith. I am keen to know why he moved there as that is where part of my family is from?
Martin Tuck