A church on Ilderton Road, Bermondsey is a reminder that Victorian missionaries did not always work overseas. Many public schools and Oxbridge colleges ran missions in poorer parts of London. Something of an Oxford-Cambridge divide was at work in the capital, with Oxford University's settlements  mostly in the East End and Cambridge's in South London. True to form, this was the church of a Cambridge mission, that of Corpus Christi College.

These missions were filling gaps in both social and religious provision by the established church. Many parishes were too large and had too few resources to adequately undertake all the work required for their poorer parishioners. Often, they did not even have enough seating in their churches. A mission would take over part of a parish (with the incumbent's agreement), building a church and usually also offering various social services. Students and graduates might spend time at the mission - not only to carry out social work, but also to learn something of the lives of the poor. 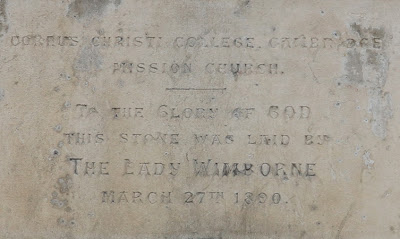 On the side of the church wall is a commemorative stone, laid by Lady Wimborne. She was the aunt of Winston Churchill, and a friend to royalty whom she entertained in her Bournemouth villa. She also had religious interests: in 1899 she would found the Ladies' League for the Defence of the Reformed Faith of the Church of England. Although the stone is dated 1890, the mission had begun in 1887. Its first premises were under a railway arch, before the present building was complete. I have found no reference to the truncated spire base on its roof; perhaps there was insufficient money to finish it.

The church was not consecrated, and so could be sold in 1962. For a while, it served other purposes but is now used once more as religious premises, the Christ the King Chapel.

Interesting post Caroline. I hadn't realised that the term 'missionary work' could also be applied to English inner cities.