Almost in the shadow of Millwall Football Club's stadium, the building now looks a little awkward and isolated. However, a carved sign above the door reveals its original purpose as home to Deptford Borough Council Slipper Baths.

If we think of council baths, then we probably picture swimming pools - after all, those are still in use today. Many local people needed more than exercise, though: in crowded homes with no bathrooms, the simple bath was a luxury. The Baths and Wash-houses Act 1846 allowed - but did not oblige - borough councils to provide facilities for the sake of public health. While such amenities were often combined with a public bath for swimming, this building housed only individual facilities.

It's not easy to pin down exactly what gave the baths their resemblance to a slipper - accounts variously suggest that they had partial covers or that they were draped with towels (in either case, to keep the heat in and perhaps improve privacy), while some definitions emphasise one end of the bath being higher than the other. Thank you to Peter Robins for sharing the appealingly outdated definition in his 1989 copy of the Oxford English Dictionary: 'a partially covered bath shaped somewhat like a slipper ... now usually one of a number of single baths of the modern domestic style installed for hire at public baths'.

We do have a contemporary description of the building. The Building News of August 1915 reported its official opening:

The entrance is at the corner of Stockholm Road and Ilderton Road, and gives direct access to an octagonal hall, adjoining which are a waiting-room and office and store. Accommodation is provided for eighteen baths, all of which are placed on the ground floor, the cubicles being tiled from floor to ceiling, with a view to keeping down the cost of maintenance. On the first floor, a flat containing a living-room, two bedrooms, and a kitchen-scullery is provided for the superintendent, while the basement is utilised for accommodating the boiler, fuel, and storage of hot water. The baths were designed by Messrs. Joseph and Smithem, of Queen Street, Cheapside, and erected by Messrs. W. S. Barton and Co., of Chancery Lane, W.C. 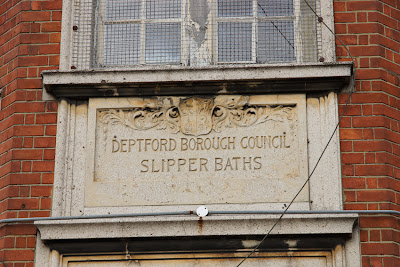 Queuing to take a turn in a bath might seem anything but luxurious today, when almost all homes have a bathroom with running hot water. However, until relatively recently, bathing for many households meant getting out the tin bath and then heating water on the stove to fill it (or at least a few inches of it). The deep and copious hot water of the slipper bath, and its relative privacy, were a real treat for many until well into the 1960s.

In her memoir, Bloody Pommies, Dorothy Dewing describes using the baths every Monday night in the late 1940s:

The bath cost sixpence per person, but Mum and I always shared a bath to save money. When your turn came  you were ushered into a cubicle with a bath and some coat hooks, and a big water spout into the bath, but no control on it - the water was turned on from the outside of the cubicle by the lady Attendant. She would put hot water in to start, and then the cold. If it was still too hot, you would have to call "More cold in No. 6, please", and she would eventually come and add some cold water. Emerging with wet hair and shivering with the cold in the winter, we would go to buy our weekly treat - fish and chips, eaten from the newspaper on the walk home - heaven!

By 1975, the baths were closed and the building empty. It was converted into a motoring workshop for young offenders, and the baths and partitions were stripped out. Underneath was a coke cellar which ran the length of the building: a last reminder of the huge water-heating operation which had formerly taken place here. The workshop is now also long-gone. A few years ago the building was home to Shekinah Ministries; today the signs are for 24-hour windscreens.

What a waste of a gorgeous building :(

This was being demolished as I passed this morning. Seems Southwark gave permission to build a bland business/residential block instead. Very disappointing decision, especially when there are so few nice buildings in this area.

I saw this building last time I went to London, seems us australians aren't the only ones who knock down historic buildings to put up shops & carparks . . . .

I went to these baths with my mum until we had a bathroom installed in 1963. It was always a great adventure. My mum paid for a bath for one adult and then I was silently allowed to climb in with her. It was a great game to a small child to have a secret bath. I was sworn to absolute silence. Such a shame the building has been demolished. Keeping it as a piece of history would have been a lovely thing. My now adult sons cannot believe we went to a different building to have what we considered the luxury of a bath.

I lived at 221 Ilderton Road and my mum was always banging on about me getting wash as a smelly teenager. You paid your sixpence and got a towel and a small bar of soap. Often the attandant would be mopping up the water seeping under the cubicle door for people loved to get their moneys worth.

I lived in Varcoe road so the baths were very close for us, I remember very well using these baths as we had no bathroom in our house in the early 1950's It was a meeting place of sorts as you would see the same people there every week, they would catch up with the local gossip while waiting their turn to bathe. When in the bath you would hear people calling out for more hot or more cold water, and people singing at the top of their voices and others joining in. Oh the memories. There was no shame in using the slipper baths because everyone was the same nobody had their own bathrooms at their homes.

Thank you so much for sharing these memories!