From Ladywell to Travancore

Ladywell may be a local cemetery, but many of its gravestones have international links. Among these is the memorial to Augusta Mary Blandford, who died aged 71 in 1906. She was the second daughter of John Folliott Blandford, born in 1800 in Wiltshire and by 1829, a chemist and druggist in London. He and his family were members of an evangelical congregation and at the age of seven, Augusta 'was led ... to yield herself fully to Christ.' She never married, and spent 44 years as a missionary in Travancore, India. 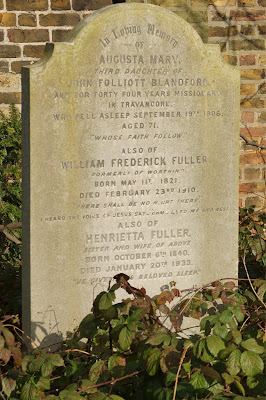 Augusta first worked as a teacher in London, before deciding that mission work was her vocation. She was sent to India in 1862, attached to the Indian Female Normal School and Instruction Society. Her adventures began with a shipwreck near Madras; fortunately, she survived and by 1864 was transferred to Travancore, a princely state in Kerala, South India. At least part of the region's appeal to her may have been the relative freedom women enjoyed. In the second half of the nineteenth century, when Augusta was there, its rulers were enacting a number of social reforms. Some of these were instigated or supported by Protestant missionaries, particularly those removing discrimination against lower castes.

Missionaries were also involved in the provision of education. Augusta learned the local language and met high-caste Hindu women who were eager to learn; crucially, she also met the Maharaja and Diwan who were keen supporters of her plans for a school.  The Diwan gave her a former palace within the sacred Fort in Trivandrum, a prestigious site also home to the Sri Padmanabha Swami temple where the Maharaja worshipped. She opened the Fort Girls' Mission School in November 1864. Among its first pupils was the Diwan's daughter. (She also taught several royal women within their palace.)

In 1880, the Church of England Zenana Mission Society was founded and the school became part of this new organisation. The following year, the school had to move premises when an unsympathetic new diwan took office - but within a few months, he had agreed it could return to the original premises. The 'temporary' site remained open as a separate school. She also opened a small women's hospital and dispensary.

Augusta would write a history of the Zenana Mission Society in Travancore, The Land of the Conch Shell, published in 1900. She left the mission in Trivandrum a few years later, in 1906, and died within weeks. Her last letter spoke of discouragement:

My farewell to Travancore is a sad one. I came here as a bright young girl, full of hope that God would bless my work, and that much good would be the result ; now, after forty-three and a half years of labour, the darkness and ignorance seem much the same.

This speaks of the difficulties of her work - and also of the negative attitudes to Hinduism which underlay her mission. Evaluating her life and goals is thus a complex task for us today: admiration of her commitment to women's education is tempered by awareness of the prejudices and imperialism which also informed her work and attitudes.

Augusta returned to England after her retirement, but did not live long. She died at her sister's home, and shares a gravestone with her sister and brother-in-law; thus Ladywell Cemetery is the resting place of a woman whose life's work had been half a world away.

Thank you! I shall have a look for Charles Forjett on my next visit. There are so many wonderful stories in the cemetery.

Just wondered if you could give me directions to the grave. I come from what-was-Travancore and my great-great-granduncle knew Miss A. M. Blandford.

Good luck finding it - your connection to it sounds fascinating!