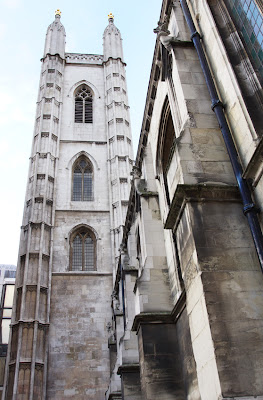 One of the numerous City of London churches, St Mary has two outstanding features. The first is its slender, elegant tower which caught my eye as I walked along Queen Victoria Street. The second is inside: the magnificent fan-vaulted ceiling. 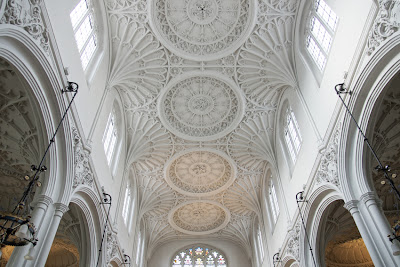 St Mary is thought to take its name from being the oldest church in the City dedicated to the Virgin Mary, and has been here for over nine centuries. John Milton, author of Paradise Lost, was married here. However, like most City churches, it was badly damaged in the Great Fire of 1666. Only the base of the tower and parts of the walls remained.

St Mary's was rebuilt by Wren's deputy John Oliver, in a similar style to its predecessor. It is therefore unique in having been rebuilt in the Gothic style. The parish had more influence than most on the design because the work was funded by Henry Rogers of Somerset, not the state. 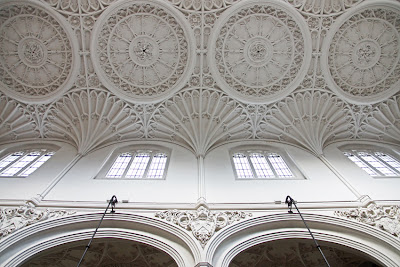 St Mary's did not suffer too badly in the Blitz, but did lose all its stained glass windows. They were mostly replaced in the 1950s, and the West Window commemorates the defence of the City against air attack.

The Royal Tank Regiment has its memorials here, and its standards hang from the wall. 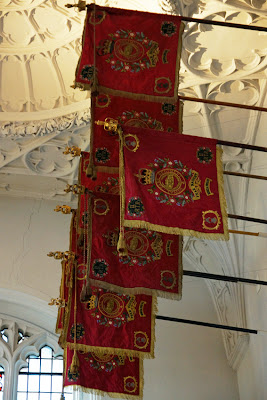 The church is now used by the Moot monastic community, whose focus upon hospitality means that alongside prayer and meditation events, the church offers a cafe (with the superbly punning name Host). Visitors can therefore take a coffee break under this exceptional ceiling. 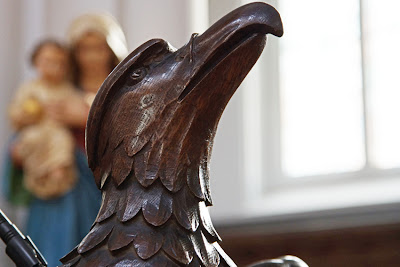