Travelling on the 123 bus through New Eltham, I saw a ghost sign which had been painted over. That the cream covering hadn't proved stronger or more durable is perhaps ironic, as it was attempting to obscure an advertisement for a brand of paint. 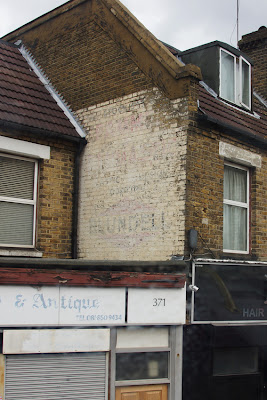 The words were barely legible, although it was apparent that there were two colours of text and a logo. However, some messing around on Photoshop reveals the wording: 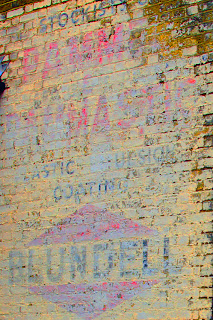 'Blundell' was actually Blundell, Spence & Co, founded as a partnership in 1811. They manufactured paint in Hull - a centre of the paint industry then, as white lead was produced there - and by the twentieth century were exporting their products around the world. Subsidiaries were established in India, Chile, South Africa and Australia. The company would merge with Permoglaze in 1960, although the Blundell Spence name remained in use for another five years.

Pammastic was a well-known brand name of the 1950s. It was a polyvinyl acetate ('plastic') emulsion which didn't need undercoat and dried quickly. Its sister product Pammel offered a gloss 'enamel' finish in a range of colours.

Can Photoshop be used to achieve this amazing result with all such ghost signs?

Some work better than others - the more variation between colours, the better, for example. It's exciting when it does work, though!

Gotcha. Thanks for the reply. And keep up the great work on this blog. Never ceases to amaze.