There are some tourist attractions in London I'm quite happy to miss. Others I love: crossing Tower Bridge most days still delights me! Then, like most people, I have a long (and growing) to-do list. Somewhere on that list was the changing of the guard. After nearly twenty years in London I felt I ought to see it, but standing outside Buckingham Palace for ages in thick crowds for a glimpse of passing bearskin hats didn't have much appeal.

Thankfully, a conversation on Twitter not only led to me crossing the event off my list at last, but also allowed me to do so with rather more enjoyment (and better photographs) than I would have managed alone. Fun London Tours offer regular guided walks which take you to the best spots, give you the background history and significance of the ceremony, avoid all the waiting around, and generally make the whole event much more entertaining. 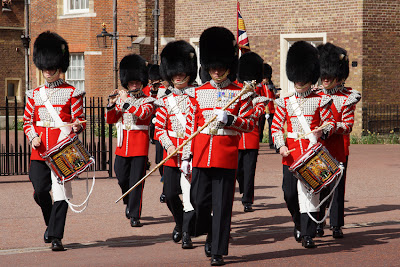 This ceremony has been taking place since the restoration of the monarchy in 1660 - not as old as the Tower of London's Ceremony of the Keys but still pretty venerable. It has also seen more changes than the Tower ceremony - not least because Buckingham Palace only became the monarch's official residence in 1837. 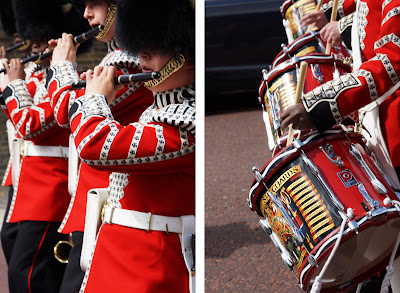 The Welsh Guards were relieving fellow Welsh Guards, although more often the change is between different regiments. As well as the elaborately-painted drums, there are more subtle clues to the regiment: the green-and-white plumes on their bearskins, badges on their collars, and even the grouping of their buttons indicate which regiment they belong to. (The others are the Grenadier Guards, Coldstream Guards, Scots Guards and Irish Guards.) Two bands provided a soundtrack to the event. 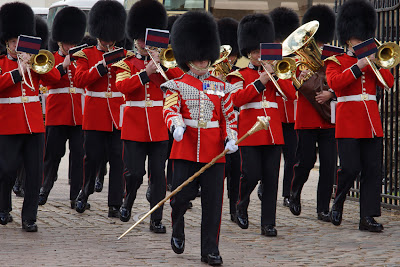 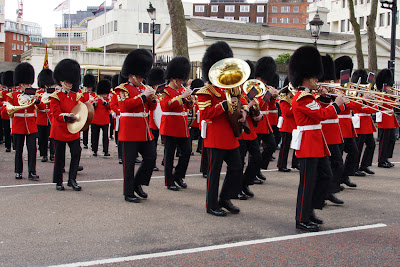 The bearskins are literally made of bearskin (from the Canadian black bear - or brown bear, dyed black, for officers). Some have been handed down for a century, although most are much newer. The first British Army bearskins were worn in the eighteenth century; in future, they may be replaced by a synthetic alternative if a suitable substitute can be found. 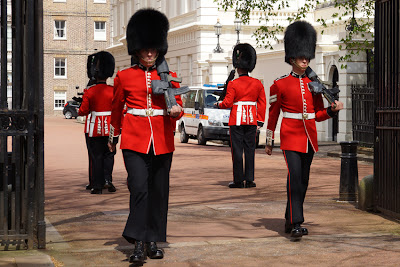 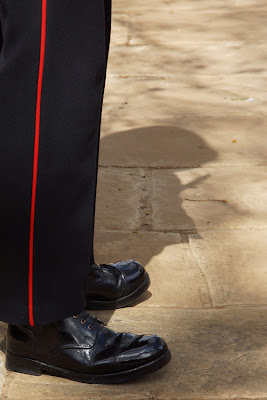 You are so right, the huge crowds and long waits outside the Palace spoil what is a must see experience for many visitors. Walking with the guards and hearing about the ceremony makes for a great experience.

There is a similar ceremony at Windsor Castle which was a lot less crowded when we went - that was a few years ago, though.

Hi Caroline,
We are adding a photo gallery to changing-guard.com.
Would you allow us to feature your Changing the Guard pictures, which would be attributed to you and link provided back to your Blog.
You cna contact me through the website for any further information you may require.