I've taken the train through Marc and Isambard Brunel's Thames Tunnel many times; on one memorable evening I even walked through it. However, I've always entered through an East London Line station. The thousands of Victorian pedestrians who were its first users took a rather different route down to it.

Before the Brunels' tunnellers could dig horizontally below the Thames riverbed, they first had to dig vertically from surface level. They did so by building a caisson at Rotherhithe - a heavy brick cylinder atop an iron cutting edge, which sank into the ground under its own weight. The earth inside could then be dug out, leaving a nice, neat vertical shaft. This process was later repeated at the Wapping end of the tunnel. When the tunnel was completed, the shafts at each end formed convenient entrance halls, lined with spiraling staircases. (The original plan was to add two much larger shafts, holding gentle ramps, so that horses and carts could transport ships' cargoes through the tunnel. However, the money ran out before these could be built.) 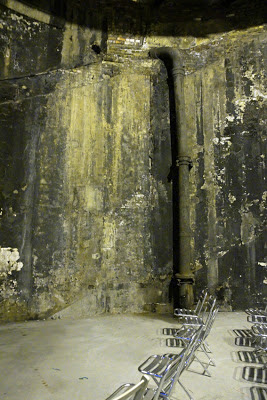 The tunnel was not a great financial success. Never able to take the horse-drawn commercial traffic which might have made it profitable, it was reduced to collecting pennies from pedestrians. When the tunnel lost its novelty and became a sleazy, dangerous place it was reinvented as a fairground, before finding its vocation as a railway tunnel in 1869. The original Wapping entrance was later incorporated into the station building; at Rotherhithe, it was simply closed. 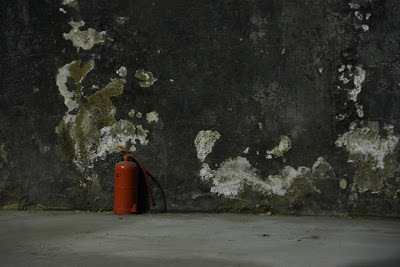 Then the East London Line was upgraded and reopened as part of London Overground in 2010. That created an opportunity for the neighbouring Brunel Museum, which tells the story of the tunnel. The contractors put a concrete floor into the upper part of the shaft (the lower part has railway lines running through it), the Museum was given use of it, and the possibility of entering the space for the first time in a century and a half was created. 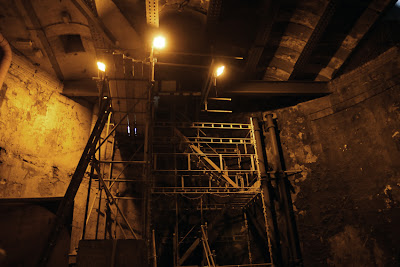 Indeed, that's just what I was able to do recently, as tours were offered during Open Garden Squares weekend. (This is not as odd as it sounds: the top of the shaft is now a lovely herb garden and sometimes cocktail bar.) It's not the easiest visit to make, involving a slightly precarious clamber down assorted steps before the visitor stoops or crawls through a narrow - but thankfully short - tunnel, ready for the final descent down temporary stairs. However, it's worth the effort as the space is quite special. It's large, cool, dimly-lit and almost empty of furnishings, but filled with murmurs of voices from above, the rumble of trains below, and its own slightly echoing acoustic. The walls still bear the scars of those earlier stairs down which Victorian sightseers descended. 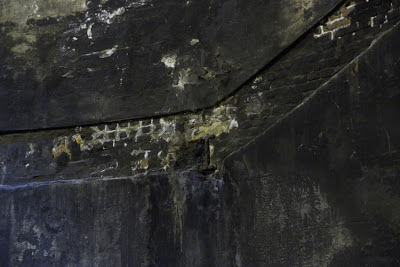 The Museum hopes to raise the money to open this shaft as a permanent space for exhibitions and events. In the meantime, it offers tours and concerts. I would recommend a visit - there are more details on the Museum website.

I also visited Park Crescent with its Nursemaids' Tunnel, and Garden Barge Square.

Really interesting. I'd love to see some live music performed down there. I'm going to investigate concerts now!

We visited the museum recently. I think we were slightly disappointed with it but it is rather new and will perhaps improve with time.

I had no idea that there was any possibility of public visits to the shaft below and, if these become available, we should certainly be interested in taking a look.