The unification of time 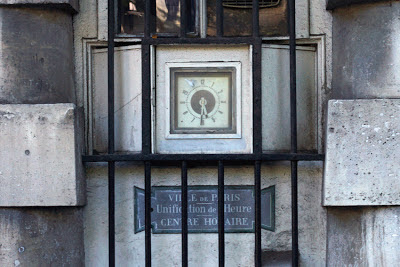 This clock and plaque are an interesting, if enigmatic, reminder of France's complex history of time.  They are attached to an official building on the Avenue du Colonel Rol-Tanguy, a former octroi booth which levied taxes on goods entering Paris; its twin across the road is now the entrance to the catacombs. The plaque (apparently older than the clock above) proclaims this spot to be a 'time centre' for the city's 'unification of time'. In fact, it's just down the road from the real 'time centre', the Paris Observatory.

Like Britain, France found that the coming of the railways made local time more and more of a problem. If each town set its clocks according to the sun, then there were significant time differences as one moved west or east. That hadn't caused difficulty when people moved no faster than horses could carry them, but when trains sped between cities and wanted to follow timetables to do so, those minutes mattered.Initially, railway companies dealt with this by using the time at a single terminus (in France, Paris) for their own purposes while their passengers could continue using local time.

However, that wasn't wholly satisfactory and pressure was growing for greater standardisation of time. It had happened quite quickly in Britain: initially, railway stations used Greenwich time while local time existed alongside. Nonetheless, more and more people chose to refer to railway time so that by 1855, perhaps 98% of public clocks were showing Greenwich time. It became official time throughout the country in 1880.


Although facing the same practical pressures, France moved rather more slowly. Time was unified in Paris in 1881 but it would take another ten years for this standardisation to be applied across the country. Gradually, more and more major towns took their time from the Paris observatory, a change which became official in 1891.

This change was helped by other new technologies. After all, if you lived on a different longitude to the official source, noon could no longer be established by observing the sun. How then could someone in Bristol or Bordeaux know what London or Paris time should be? Clocks could be transported from the source, but that was neither elegant nor very sensible (although it did work well for Ruth Belville within London.) A better means of transmitting time was needed, and luckily the technology was available - the telegraph, which allowed a time signal to be sent as needed. Alternatively, one could telephone the Paris Observatory and ask for the correct time; by the 1930s, its director Ernest Esclangon was so fed up of the telephone line being tied up in this way that he invented a speaking clock, which came into service in 1933 - listen to it here. Britain would follow this example three years later.

However, the peculiarities of French time had not ended in 1891. In fact, the railways used a third measurement of time to ensure that passengers (potentially confused by the differences between local and station time) didn't miss their trains. The network ran five minutes behind Paris time, so that 'Rouen time' governed when the train actually departed. Thus until 1891, a passenger could be aware of local time, which would be useful for everything except catching a train; Paris time, which the railways apparently ran on; and the slightly later Rouen time at which her train would really leave the station. This final anomaly was only resolved in 1911, when Rouen time was abolished on the railways. That same year, standard time also shifted by a few minutes to align it with the new international standard, Greenwich Mean Time.

Further reading: there's an excellent article in French on the unification of time by Lucien Baillaud.