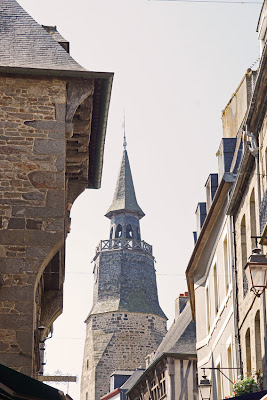 The Breton town of Dinan is at the tidal limit of the river Rance, and this favourable position made it a wealthy trading town in the middle ages. In the fifteenth century, the municipal authorities decided to build a tower which would dominate the town and serve as watch-tower, council building and bell-tower. The town's archives were stored here and meetings held here until the Revolution, when confiscations made larger and more suitable premises available. It remained the highest point of the town until the nineteenth century, when the spire of the church of St Sauveur reached a little higher. 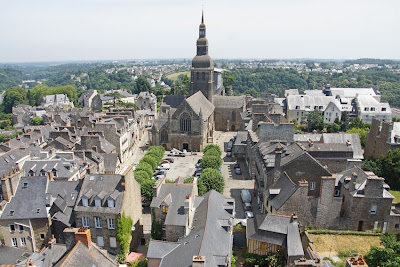 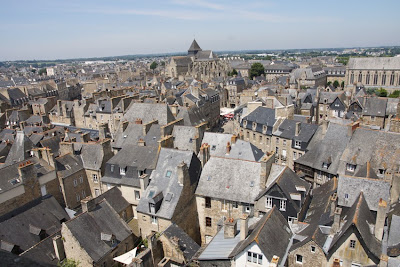 The tower continued to be a watchtower, particularly useful for spotting fires, but in 1937 it opened to the public and now offers visitors impressive views over Dinan. However, the interior also deserves attention - and not only because the stone steps give way to steeper wooden ones and finally to an unnerving near-ladder. It also contains historical information and, most excitingly, a clock movement dated 1498. Duchess Anne of Brittany authorised the installation of a clock in 1507 - making Dinan the third Breton town to be allowed to do so. Indeed, this clock's new home became known as the Tour de l'Horloge (the Clocktower). 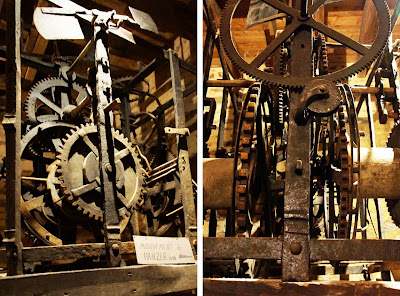 The mechanism was made by M Hamzer, a German clockmaker working in the Breton city of Nantes. It was used until 1847, although it had undergone some modifications, the first in 1657. The workings are of wrought iron, and included an hour hand (but no minute hand) and a chiming mechanism. 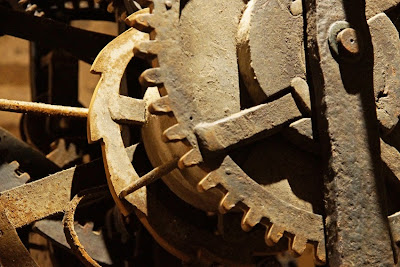 Its replacement continues to strike the hours and quarters - quite an experience when you're stood alongside the bells at the top! 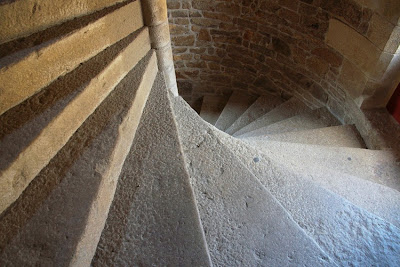 Interesting that the clock should have been modified in 1657. The first pendulum clock was made by Christiaan Huygens in 1656, and was much more accurate than clocks with the previous 'verge' mechanism, which was controlled by a 'foliot', a horizontal swinging arm with weights at each end.

Many tower clocks with verge escapements were modified to use pendulums in the following years, but to have done so only one year after the invention would be remarkably quick.

The Hamzer clock in its present state lacks this part of the mechanism. It would have engaged with the horizontal wheel with sloping teeth which you can see at the top right of your left-hand picture, which clicked round one tooth every time the foliot or pendulum swung.

Thank you - and now I'm intrigued to know when it did get a pendulum. I haven't found any information online but will have to do some more research when I'm next in Brittany.

I'm pretty certain it did get a pendulum, though not necessarily in the modification of 1657. The horizontal wheel I mentioned is characteristic of a pendulum mechanism, which swings on a horizontal axle. The original foliot mechanism would have swing horizontally on a vertical axle, engaging with a vertically set wheel. Also, the horizontal wheel looks lighter than the rest of the mechanism, and therefore maybe newer and more delicate.

I so wish my father were give to give you that answer. He died in 2013 at the age of 93. A Frenchman born in Dinan and his father was one of the towns Watch and Clock Makers. My father when in his teens had to wind the clock up daily on his way to school. I can say that he actually made a replica whilst in his teens and my brother is the proud owner of it now. That copy does not have a pendulum so I myself am unsure.