When books were truly expensive, libraries were so careful to prevent theft that they chained each volume to its shelf. Far from borrowing it to take home, a reader couldn't even move it from that section of the room, so would consult it in situ. Nonetheless, as the alternative had been to keep books carefully locked away altogether or require valuable security from borrowers, a chained library significantly improved accessibility. 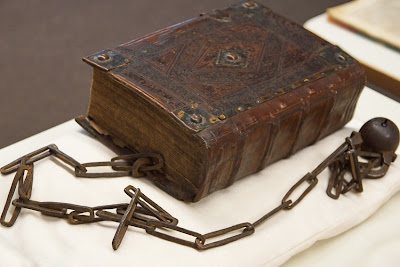 Innovations in printing and the growth of literacy made books far cheaper, and they were mostly liberated from their chains in the eighteenth century. Probably the best-known surviving example is at Hereford Cathedral. While the City of London's Guildhall Library is not in chains, among its treasures is a book with  chain still attached.

However, the book was never chained to the shelves of Guildhall Library, which has had a surprisingly turbulent history. It was founded early in the fifteenth century thanks to a bequest from wealthy merchant Richard Whittington - the famous Lord Mayor, better known to us as Dick Whittington. Unfortunately, in 1549 the books all got 'borrowed' by the wealthy and powerful Duke of Somerset, Lord Protector. He took them away by the cartload to furnish his new home on Strand, Somerset House. They were not returned. Only one of the books is now in the collection - and the City of London had to buy it from a dealer in 1926. 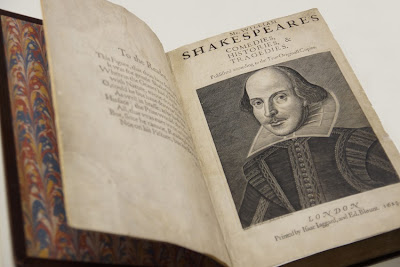 The Corporation of the City of London seem to have been quite happy without a library for several centuries, until a new one was opened in 1828. It began with 1,700 books but has grown enormously since then - although 25,000 books were lost in the Second World War - and moved several times.  Although the emphasis of the collection is naturally upon the City of London and its history, there is much more to be found here: after all , the history of London takes in everything from Shakespeare to the stock exchange, maritime history and the diverse activities of its livery companies. In particular, Guildhall Library has an outstanding collection of cookery, food and drink books. It has also acquired rare items including this chained book and, famously, a Shakespeare first folio. 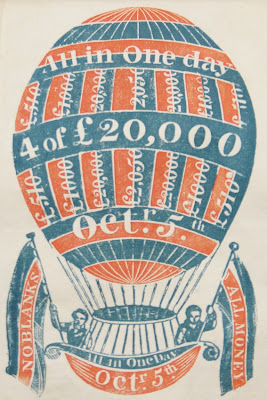 It is not limited to books, either. Among the most fascinating of its treasures are ephemera - printed items designed to be read and then thrown away. The advertisements for eighteenth-century lotteries are not only pieces of social history, but also significant examples of early two- and three-colour printing, while a collection of broadsheets depicting nineteenth-century suicides from the Monument are among the rarest items the library possesses.

Guildhall Library is open to the public from Monday to Saturday, 9.30am to 5pm. It is a reference library (no borrowing!) and also hosts regular exhibitions and events (including, recently, its first open day).

I loved the idea of chains because it made explicitly clear that books and learning were valuable and to be taken seriously.

But the chains were supposed to protect the books, literally. So how did the books get borrowed by the Duke of Somerset? As a Lord Protector, he ... failed!

The chains at Hereford are attached to a metal rod that extends the width of the bookcase and is locked in place. So all the Lord Protector would have to do is to unlock the metal rods and slide the chains off.

It just goes to show you should never lend books to people, once it is on their shelf, it mysteriously becomes their book.

For lovers of old libraries I would recommend Marsh's Library in Dublin and the Cathederal Library in Lincoln which was designed by Sir Christopher Wren.