Tucked away behind Woolwich Road, the East Greenwich Pleasaunce is some way off the Greenwich tourist trail. However, it is not only a popular local park but one full of history. 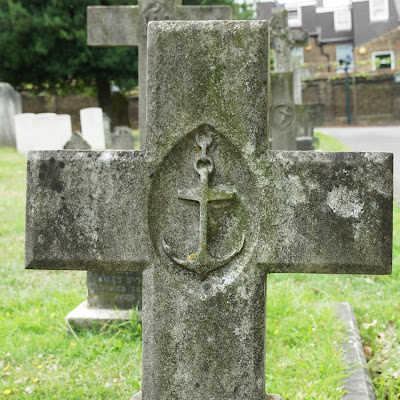 The Royal Hospital, Greenwich (now the Old Royal Naval College) faced a problem in the 1840s: its burial ground was full. Despite the Hospital's name, that didn't suggest poor medical care. The Hospital provided a home for several thousand Navy pensioners who were either elderly or infirm, so most of its residents would expect to die there.  They were buried around Devonport House, which was then the infirmary. 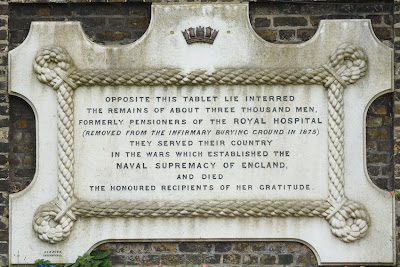 After spending quite a while searching for a suitable new location, the Admiralty bought this land in 1857. Within a few decades, the original burials in central Greenwich were threatened by a railway tunnel, so a further 3,000 burials were moved here. More were relocated in 1925 to enable a nurses' home to be built. There are other maritime burials too, including Greenwich staff and naval First World War graves.

One which does not appear to fit here is the grave of Anthony Francis Oscar Sampayo, Minister Plenipotentiary (ie ambassador) of France, who died on 4 August 1862. However, the Standard death announcement discloses the reason for his presence: he died 'at the residence of his uncle, Sir W. Cunningham Dalyell, Bart., Royal Navy, Greenwich Hospital'. Cunningham Dalyell was in fact commander of the hospital, and was married to Maria Sampayo. Her brother (presumably Anthony's father) had been French Minister at the German state of Hesse Cassel, a post held by Anthony at the time of his death. 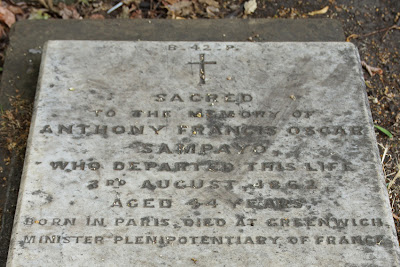 A year after the 1925 reinterments, the cemetery was sold to the Borough of Greenwich and became a park. Today, it has a cafe and play areas; visitors stroll or play among the gravestones.

I thought that Emslie Horniman's Pleasance in north Kensington had a self-consciously picturesque name, but the extra u here really puts the medieval lid on it. You'd expect it to have a tiltyard and a bower for maidens.

I've only been reading this blog for a few weeks, but it has been consistently fascinating.

Thank you! It is a great name - perhaps they went for the picturesque wording to distract from its being full of gravestones...

Hello,
I believe that there is a confusion between Antoine François Oscar de Sampayo , born in 1818 , son of Blanche Ludivine Buffeault and Anthony Sampayo and his half- brother or cousin, Frances Sampayo-Galwey or Galloway, son of Tome X. Sampayo and Mary Louisa Galwey or Galloway (see the act of succession of Anthony Sampayo in Cork, Ireland on 1936 for Louisa Galloway living in Liverpool and their only two children Maria Sampayo and Frances Sampayo , minor and in the care of their mother. (my blog www.enquete-sur-le-passe.blogspot.com . There is an English version . However , being the great-granddaughter of Frances Sampayo Galwey or Galloway or of his sister Maria Sampayo - Galloway, I would like to know more about the marriage of Maria Sampayo - Galloway with Cunningham. This is Mary Constable, daughter Lily Lapasture and Thomas Constable who married Lord John Frederick Lambton 5th Earl of the Durham ( Lily Lapasture did not married no Bullough , she married Thomas Constable , so no Hermione Bullough supposed daughter of Lapasture Lily married John F Lambton) . I wonder if Constable is a doublename of
Cunningham ( Cunningham Gonstable )