Surviving the Charge of the Light Brigade


Tennyson's poem The Charge of the Light Brigade helped make this Crimean War incident one of the most famous of military blunders. On 25 October 1854, at Balaklava, Lord Cardigan led his light cavalry against Russian infantry - but due to a miscommunication, they entered the wrong valley and were mown down by Russian guns.

Although the majority of the 'six hundred' were killed, wounded or taken prisoner, there were survivors. Trumpeter Landfried, who had sounded the charge, was still alive to play it again for an Edison recording in 1890. That same year, Kipling wrote a poem, The Last of the Light Brigade, evoking the poverty in which many of these ex-servicemen were living. 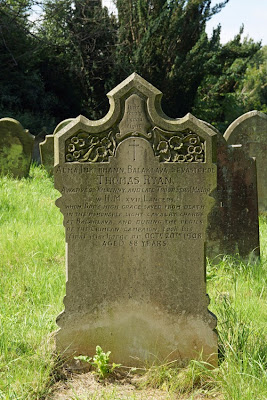 One of the longer-lived survivors is buried in the churchyard of St Deiniol's, Hawarden in North Wales. Thomas Ryan, 'a native of Kilkenny and late Troop Sergeant Major', 'took his final discharge on October 20th 1908, aged 88 years'. He had led a full and eventful life both before and after 1854.

Just a year before his death, he told his life story in a church magazine. In some ways, it is a conventional Victorian narrative: a young man, fond of drinking, swearing and sin, sees the error of his ways and is reformed. However, the life he led before his conversion to Christianity and abstinence from alcohol was not at all conventional, even before he took part in the Charge. He describes entering the service of Lord Ormonde of Kilkenny Castle, before becoming valet to a nobleman who left him a small fortune. Ryan spent all this in a few years in London, and had no choice but to enlist - a chain of events which led him to the Crimea. As his gravestone records, he would be present at Alma, Inkermann and Sevastapol as well as Balaklava. After his discharge from the army, he continued his dissolute ways until a fellow workman persuaded him to join the Good Templars, a freemansonry-style temperance organisation.

Ryan was living with his son and daughter-in-law in Shotton. In 1908, he died when he fell into the river Dee and drowned. His grave was restored in 2001.

It is important to remember that some of the men did survive the 1854 Charge. Like any other ex-servicemen, they had reintegrate themselves into civilian society at a time when they probably didn't get much support.

I know more about WW1 ex-servicemen and even they didn't get much support, 60 years later.

I was recently visiting a few graves at Hawarden and have just come across the grave of TROOP SERGEANT MAJOR Ryan Thomas H.M. xv11 British Lancers - astounded to find this grave. This brave man had a sad end - drowned in the River Dee! May he and those who took part in the charge rest in peace - not forgetting the poor and brave horses who also took part. The mere thought of what they did on that day is hard to comprehend!