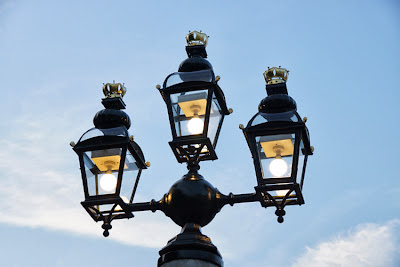 Wren's masterpiece in Greenwich, the Old Royal Naval College, was still the Royal Hospital for Seamen in 1850 when its formal landscaping scheme was created. Its architect, Philip Hardwick, laid out the formal lawns and fountains - all lit by lanterns. Originally gas, the lights now run on electricity. However, that is not the only change they have undergone over the years. Time has taken its toll, and the lanterns (which had been crafted locally by ships' lantern-makers) are not easy to maintain. Each is individual, so there are no standard parts - a particular challenge when it comes to replacing broken glass, as every curved piece is different. For years, damaged panels were replaced with perspex which can bend and flex to fit. The sails topping many lanterns had lost their lustre, and some were damaged.

However, the lamps are now undergoing a restoration. Seven of the 72 have been completed so far, and they look extremely fine with their hand-made glass and gilded tops. Seeing them at their best like this reminds us that they do more than light the surroundings: they also enhance them, not least by reflecting the naval connections of this place.

My favourite is probably this lantern, whose bracket has tiny cannon and cannonballs, anchors, and Poseidon's trident. It is shedding light not only on the pathway, but also on the ORNC's past purpose! 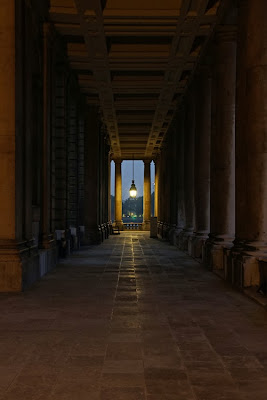 Thanks! I went on a day tour of the Old Royal Naval College and other Greenwich sites a few years ago, but didn't notice (or cannot remember) the beautiful lanterns.

Perhaps it is because we attune our eyes to the stunning architecture and huge paintings, and miss the equally important decorative arts.

I think you're right. It was a real joy to have a visit to the ORNC dedicated to these lanterns!