Birmingham dominated the world in this trade, with over a hundred factories at its height. Its centre was the Jewellery Quarter - but I'm not talking about gems and trinkets. It's less well-remembered that 75% of the world's pen nibs were once made in this city. After all, most companies closed within a few years of cheap Biros becoming available, and today fountain pens are specialist items. 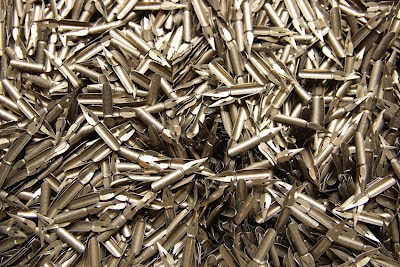 However, one place which does remember this industry very well - and brings that past brilliantly to life - is the Pen Museum. It has literally millions of nibs, in boxes, on trade cards, and shaped into elaborate displays for the great Victorian exhibitions. There are also related items including blotters, inkwells and typewriters. That may sound rather niche, but in reality it's hard not to be enthralled by the exhibits. After all, they tell us so much about everything from how we wrote before Biros, to working life in Birmingham's factories, to the marketing techniques that created hundreds of brands out of this one item. 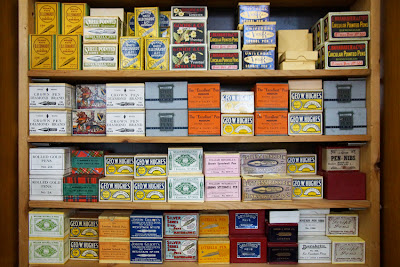 The industry democratised writing: quill pens and the first, hand-made steel nibs were expensive. Mechanising production allowed them to be sold cheaply, so that most people could afford a pen. The sheer volume of production and sales, though, made some manufacturers very wealthy. 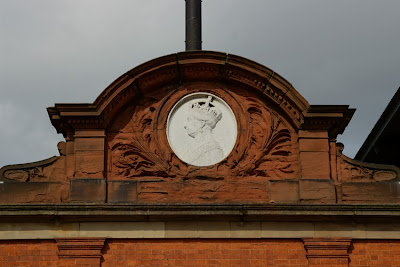 One of the great figures of the industry was Joseph Gillott, who established his company in the 1830s, quickly moved to purpose-built Victoria Works, and made a fortune. So rich that he walked around with gemstones in his pockets and was a patron of artists including Constable and Turner, he was also rather canny. On the morning of his wedding, he got up early and made a gross of pens. They were not wedding favours - he sold them to the guests! 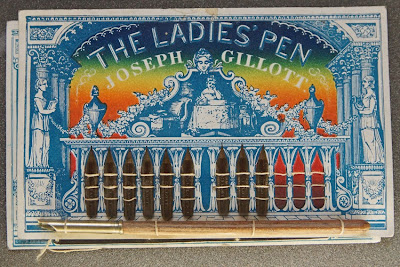 By contrast, another major manufacturer, Sir Josiah Mason gave much of his fortune away. He founded almshouses, a huge orphanage, and a college of science which would later become the University of Birmingham. While still Mason's College, it would count future prime ministers Stanley Baldwin and Neville Chamberlain among its students. 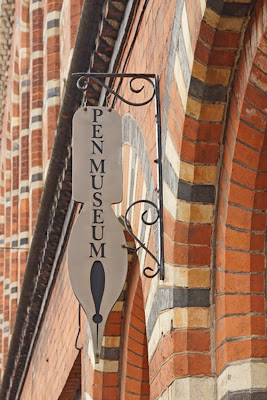 W E Wiley catered to an up-market clientele, with gold-plated nibs and luxury pen-holders. Their factory, across the road from the Victoria Works, was known as the Albert Works. They too were clever about making money: surplus steam produced by the manufacturing process was used to heat Turkish baths on the top floor. (These were a profit-making business rather than a workers' perk.) It is that building, now known as the Argent Centre, which houses the Pen Museum. 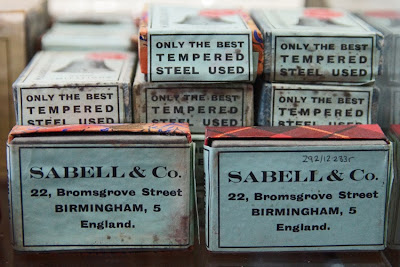 Most exciting are the machines - because visitors can actually use these to make their own nib. First, the shape is stamped out of a strip of steel. I was quite pleased with my solitary attempt, but the blankers, women who operated this machine, were expected to cut over 18,000 nibs a day.

A hole is punched - this will stop the split added later from travelling too far up the nib.

Next, the brand name and size are stamped onto the nib.

Now the nib is formed into its distinctive shape, or 'raised'. (It would have been annealed first, to soften the metal by first heating it and then allowing it to cool slowly.)

At this point, the nib needs to go through quite a process to harden it again: heating in a furnace or muffler, cooling in oil, boiling in soda water, heating over a charcoal fire, cleaning in sulphuric acid and scouring. Finally, it would be ground. All that would obviously be impossible to fit into a museum visit so, Blue Peter-like, we now took nibs which had already been through the procedure and completed the final stage. The nib was split, and ready to use. Amazingly, the museum offers all this, and other activities including many for children, for free (although donations are very welcome). It's definitely worth taking a break from the gold and diamonds for a different kind of gem in the Jewellery Quarter. 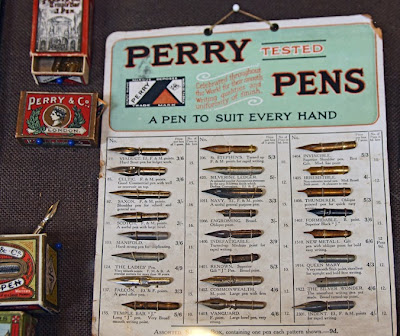 We had metal dip pens when I was at school in the 1950s, and desks with inkwells in. It sounds like a recipe for disaster, and I am surprised that we only got moderately inky. Perhaps thanks are due to Quink 'Royal Blue Washable' ink, which could be got out of clothes with only moderate difficulty.

At this time the Biro was a luxury, more expensive than a cheap fountain pen: if I remember rightly the standard model with a removable cap cost 5s and the retractable one 7s 6d. The cheap Bic Cristal ballpoint, which killed the nib pen, had been manufactured since 1950 in France but had yet to arrive in Britain. I first saw one around 1960. It cost 1s, later reduced to 9d.

MacNiven and Cameron's Birmingham pen nib factory, in Watery Lane, Bordesley, struggled on till 1964. Once there were enamel advertisements everywhere for their products:
They come as a boon and a blessing to men,
The Pickwick, the Owl and the Waverley Pen.

I was of a generation that learned to write with Biros, but I did use fountain pens as well. My handwriting is always much better when I do use one.

The Pen Museum has some lovely examples of that advertisement!