A Roman Eagle in London

Minories, a City of London street leading from Tower Hill to Aldgate, takes its name from the Minoresses  (nuns) who had an abbey here in the middle ages. However, its history goes back much farther than that, as evidenced by an extraordinary recent find. Excavating the site of a new hotel development, Museum of London Archaeology discovered an eagle and snake on the final day of the dig. 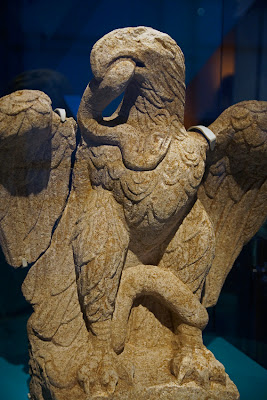 The Roman sculpture was carved in the first century, from Cotswold limestone. It has survived in remarkably fine condition, intact except for a broken wing and with details still sharply delineated. Indeed, it's the best example we have of Romano-British carving.

The eagle seems to have adorned the mausoleum of a prominent Londoner, functioning as a symbol of power and good. As for the serpent, it represents evil - and has a rather unlikely set of teeth. Archaeologist Michael Marshall told the Guardian that 'We did have a go at identifying the species of snake when we had some zoologists in – but they just said 'it's a snake'.'

When the mausoleum was demolished, its centrepiece was thrown into a muddy ditch where it lay for the next nineteen centuries. Discovered just a month ago, the sculpture is now on display in the Museum of London's Roman galleries for the next six months. Go, and meet its haughty gaze! 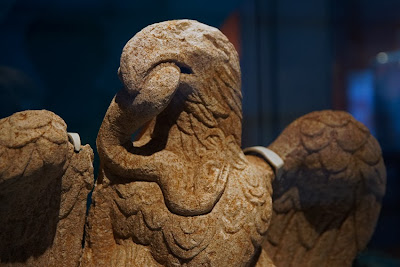 I mentioned the sculpture on the Classics-L discussion list, and had two interesting responses.

1. It could be interpreted as a representation of the therapeutic image of Aesculapius, a composite representation like that of the caduceus, the key elements being snakes entwined about a staff surmounted by wings. The eagle, of course, was associated in myth with the sun because of the heights at which it can fly, whereas the snake was associated with immortality because of the way it can shed its skin. This interpretation of the image might suggest the eagle is transforming itself into a phoenix of sorts by consuming the mysteries of immortality.

2. Another suggestion is that it portrays an ominous scene in the Iliad, 12.195-210. 'While they were busy stripping the armor from these heroes, the youths who were led on by Polydamas and Hektor (and these were the greater part and the most valiant of those that were trying to break through the wall and fire the ships) were still standing by the trench, uncertain what they should do; for they had seen a sign from heaven when they had essayed to cross it -- a soaring eagle that flew skirting the left wing of their host, with a monstrous blood-red snake in its talons still alive and struggling to escape. The snake was still bent on revenge, wriggling and twisting itself backwards till it struck the bird that held it, on the neck and breast; whereon the bird being in pain, let it fall, dropping it into the middle of the host, and then flew down the wind with a sharp cry. The Trojans were struck with terror when they saw the snake, portent of aegis-bearing Zeus, writhing in the midst of them ...'. Note that the snake's head is positioned to bite the eagle on the breast.